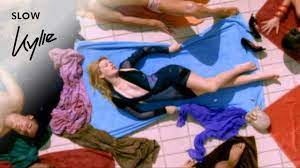 In early 2003 Kylie Minogue was still queen of the dancefloors with her last mega-selling single Can’t Get You Out of My Head and three follow up top 10 hits in the UK which had all charted highly in Australia throughout 2002 to confirm her chart domination of that period – In Your Eyes (#1) Love At First Sight (#2) and Come Into My World (#3).

Minogue had completed her European and Australia Fever tour, and was working on her ninth album, Body Language, which was to be recorded in London, Ireland, and Spain. 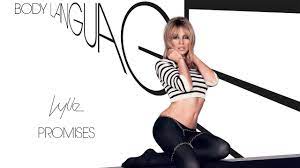 Kylie was playing a more active role in the album’s whole creative process and she worked closely with Dan Carey and Emiliana Torrini (aka production duo Sunnyroads) on the development of Slow, the lead single from the album. Englishman Carey was an experienced songwriter/producer who had previously worked with Fatboy Slim and Franz Ferdinand and would in the future work with Australia’s Tame Impala. Emiliana Torrini was an Icelandic singer/songwriter whose 2000 album, Love in The Time of Science, had received critical acclaim.

Slow would become Minogue’s first writing credit on a #1 UK hit, the record is a minimalist, intoxicating mix of 80’s synth pop, drum machine, and new millennium electro-dance club grooves, Kylie exhorts her dance partner to “slow down” and move with her; the intent of the lyrics is seductive, and beguiling and Minogue’s vocals are breathy, hypnotic and seductive. Ever the mistress of re-invention, the cover art depicts Kylie as French 1960’s sex symbol Brigitte Bardot, long blonde hair, striped crop top, panda eyes, exposed midriff, low-cut pants, all topped off with a kittenish pout that La Bardot would have approved of. 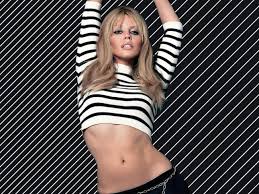 The promo video was shot at the Olympic Diving Centre in Barcelona, the Piscina Municipal de Montjuic, and shows Kylie singing whilst sunbathing next to the pool, her outfit was revealing but within the bounds of good taste, she was 36 years old and a mature and respected performer.

This was one of Kylie’s two favorite videos along with the clip for Come into My World, the shoot was interrupted by rain and took three days to complete, the shot location has been described as “fantasy lido” and Kylie has remarked that the staging of the clip was “anti-choreography.”

Slow charted #1 in Australia, UK, Denmark, and Spain and in the top 10 in eleven other European countries, in 2003 Kylie Inc. started to evolve as her Love Kylie range of lingerie was successfully launched. 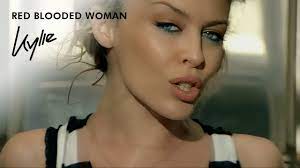 Kylie’s next two singles – Red Blooded Woman, and Chocolate– were co-written by former Alisha’s Attic member Karen Poole (daughter of 60’s UK star Brian Poole), and Johnny Douglas, and were international hits. Red-Blooded Woman hit #1 in Australia and #5 in the UK and reflected a more pronounced US rhythm and blues ambience inspired by the hits of American producer/rapper/songwriter/DJ Timbaland (real name Timothy Mosley), and it also name-checks SAW’s hit, You Spin Me Round (Like a Record) by Dead or Alive.

The promo clip depicted Kylie as a commuter stuck in a traffic jam in LA, who alights from her vehicle and struts along the line of stationary commuters, ultimately swinging off the back of a fuel tanker.

Chocolate was a velvety ballad lifted from the Body Language album and charted top ten in both the UK and Australia, like Red-Blooded Woman this song was the product of a talented quartet in Minogue (lead vocals), Johnny Douglas (all instruments except keyboards), Dave Clews (keyboards and programming); with Douglas; Poole and Minogue providing backing vocals during the recording sessions at the El Cortijo Studios in Spain.

The original version of Chocolate included a rap by Ludacris which was deleted prior to release, and the innovative promo clip featured excerpts from MGM musicals, Kate Bush videos and the 1948 classic movie Red Shoes, which starred Australia’s Robert Helpmann.