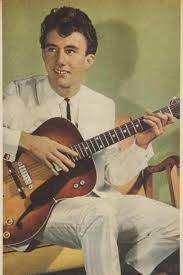 Johnny “Chess” Chester (1941) was a young Melbourne rock star from the working- class suburb of Fitzroy who formed the Jaywoods in 1959, inspired by the music of Elvis Presley, Buddy Holly, Eddie Cochrane, Gene Vincent, and Johnny O’Keefe. The band debuted at St. Cecilia’s Hall in Pascoe Vale (Melb), and soon after Johnny abandoned his job as an auto brake mechanic in his father’s business, and with the encouragement of several musical uncles, pursued a career in entertainment. The band quickly attracted a local fanbase with their hard-rocking repertoire, and were soon appearing at professional gigs at the Coburg Town Hall, and the Arcadia Ballroom in Preston. Local DJ Stan Rofe introduced Chester to Ron Tudor of W&G Records to whom he was signed and released his debut single Hokey Pokey in 1961, it was a traditional dance song originally written by Jimmy Kennedy and various singers had reprised it in different styles. The Chester version was a bright up-tempo rocker with superb backing by the Thunderbirds and Henri Bource’s distinctive saxophone flourishes.

He quickly followed up with the rocker Can Can Ladies which featured a driving beat with drums, guitar and saxophone from the Thunderbirds, formerly recorded by Barry De Vorzon and the Tamalanes in 1960, and backed it with the gentler piano-based pop of What A Night, a former hit for the Dells in 1956, Johnny would take the record to #5 in Melbourne, and #20 nationally, for his biggest hit to this time.

Although recording with the Thunderbirds it would be the Chessmen who would become Johnny’s regular backing band, the definitive lineup was – Bert Stacpool (piano), Les Stacpool (guitar), Frank McMahon (bass) and Mike Lynch or Graham Trottman (drums), local DJ Stan Rofe would mentor Johnny and the band, promoting them via his Platter Parade radio show. Above – Johhnny and the Chessmen -L-R – Frank McMahon, Mike Lynch, Johnny Chester, Les Stacpool, and Bert Stacpool.

In 1961 Chester’s first stadium performance was in support of Connie Francis and Johnny Burnette and he followed up with his impressive cover of Shakin’ All Ove, which climbed to #25 in 1962. This was one of the few original rock songs that came out of the UK in the early 1960’s given the domination of US artists and composers, only Cliff Richard with Move It and Billy Fury with Wondrous Place had hit the UK charts with local compositions. 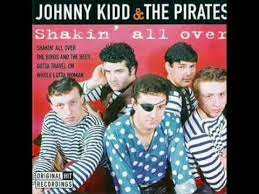 HMV Pop producer Wally Ridley was recording Johnny Kidd and the Pirates at the Abbey Road Studios (London) and had decided to make a rocked-up version of Yes Sir She’s My Baby (also recorded by Col Joye in 1960) the A-side of their record, but needed something for the B-side.

Pirates bass player Brian Gregg, guitarist Alan Caddy and Johnny Kidd (real name Fred Heath), met in the Freight Train coffee shop nearby and improvised what they described as “any old rubbish” to fill the B-side, it was really all about how girls made them feel, and it was quite controversial; when first released  “When you move in right up close to me/That’s when I get the shakes all over me/Quivers down my backbone/I got the shakes down my knee bone/ Ye-ah, the tremors in my thigh bone/Shakin’ all over.” Anatomically the song pressed all the right buttons, and it became an early rock classic from the UK.
They rehearsed the song without instruments on the morning of the recording session and then cut the record that day, lead guitarist Joe Moretti’s opening riffs and solo break were memorable, DJ Jack Good plugged the song on his new program Wham! and it became an impressive original hit for the English rockers when they took it to a UK #1 hit in 1960, but strangely it wasn’t a hit in this country.

Arguably Johnny Chester, with the peerless backing of the Thunderbirds, delivered the definitive Australian version of this song, although Normie Rowe and the Playboys got close in 1965, Chester took this one to #4 in Melbourne for a solid hit, he would also tour with Roy Orbison, the Everly Brothers, and after he had moved onto Country music, would also tour with Johnny Cash, Kenny Rogers, and Charley Pride.

From 1962-64 Johnny’s next eight singles were recorded with backing of The Chessmen and his most successful song from this period was Teeny, a song originally composed by German tunesmith/producer Christian Bruhn, who was a prodigious composer of hits in Germany and Europe throughout the period 1960-1980. Bruhn had produced the original version of this song for Dutch actor/pop star Johnny Lion (John van Leeuwarden) in 1963. Chester added English language lyrics to Bruhn’s music, and a churning beat and solid rock riffs by the Chessmen delivered the last top 30 hit for Chester as a rock and roller. The song traded on the word “teeny” a colloquialism for a short teenage girl, which charted #28 in January 1964, and was boosted by Johnny’s TV shows of that era, Teen Time and Teen Scene in the period 1963-1965.

In 1964 Johnny toured with the Beatles on their spectacularly successful tour of Australia and survived the pandemonium and adulation around the Fab Four with his reputation enhanced. “Chess” above with the Fab Four in Australia.

Johnny would segue to novelty, country and western, and MOR sentimentality in the post-rock era, with hits including Gwen (Congratulations) (#19 in ’71), Shame And Scandal (#13 in ’72), Readymix Revenge (#37 in ’72), The World’s Greatest Mum (#8 in ’73), and She’s My Kind of Woman (#14 in ’74). He would win no less than four Country Music Awards between 1975-83, and remained a perennial performance favorite on the heritage circuit nationally. Johnny married his childhood sweetheart Larraine Isbister in 1964, they raised three daughters and remain happily married, living in the seaside town of Rosebud (Vic). 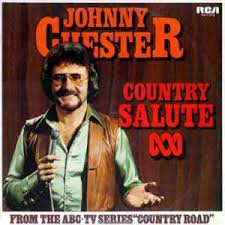