The Thorpe family migrated to Brisbane from Manchester in 1955 when Billy was nine, and as a talented yodeler he got early exposure on local TV shows under the stage name Little Rock Allen. At age 17 he relocated to Sydney and after moving on from a duo with Peter James, he joined surf rock band the Vibratones, who already had one surf instrumental record to their credit – Smoke and Stack. As the band were already contracted to the local Festival Records, a subsidiary of Linda Lee Records, Billy Thorpe moved quickly to replace incumbent front man Johnny Noble, re-named the band Billy Thorpe and the Aztecs, and the group were now poised to lead the mod rock transformation of the local music scene. Vocal harmonies were critical to the new beat music genre, the lead singer and guitarists all had to front the microphone and sing in harmony, it became imperative for bands to recruit such capable front men as Billy Thorpe, Ray Brown, Jim Keays, Glen Shorrock and Stevie Wright if they were to succeed. Below – The original lineup L-R – Col Baigent (drums), Tony Barber (rhythm guitar), Billy Thorpe, Vince Melouney (lead guitar), John Watson (bass)

Poison Ivy was a breakthrough #3 hit for the band, a beat cover of the 1959 Lieber and Stoller hit for the Coasters (#7 in the US) and was influenced by a Rolling Stones EP version of the same song that Tony Barber had received in a package of recordings from his brother in the UK. The original version of the song traded on an ebullient chorus and a lead vocal melisma on the word “ivy,’ to this the Aztecs added the thundering rhythm section of John Watson (bass) and Col Baigent (drums) and the intimidating guitar riffs of Vince Melouney (lead) and Tony Barber (rhythm). Melouney and Watson played distinctive Burns Bison guitars with inward curved body horns and batwing headstocks, as they moved to the beat behind the suited and well-booted, boyishly good -looking Billy Thorpe up front. (Three monstrous Burns Bison guitars feature in the music vid for The Honeycombs hit Have I The Right.) 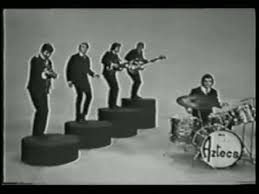 The Aztecs would successfully trade on the engaging Billy Thorpe vibrato, as well as a dynamic stage act, and all the time with Billy’s hands either clutching his lapels or firmly held behind his back, in a move borrowed from Billy J. Kramer, the B-side was Broken Things written by a newcomer who called himself Anthony Arthur Barber.

Billy Thorpe recalls in his memoir Sex and Thugs and Rock ‘n’ Roll that recording songs in 1964 was a primitive affair  “The band was recorded live on one track and the vocals were recorded simultaneously on the other, no mixing afterwards…it was a live recording…reverb and tape echo were generated live as the band recorded…Festival’s all-brick bathroom downstairs from the studio had a pretty good natural reverb…the live sound from the studio was sent to a speaker in this toilet, a microphone was placed in the cubicle and that was the reverb! The only problem was the toilet had a habit of flushing itself in the middle of a take and we had to start again!”

Poison Ivy was a smash hit and the 18th biggest-selling record in “64, the Beatles were touring Australia at the time and the Aztecs knocked the Fab Four’s EP Beatles Requests off the top of the charts, and were granted an audience with John, Paul, George and Ringo at the Sheraton Hotel in Kings Cross.

The beat music scene exploded across Australia, Billy and the Aztecs became the kings of John Harrigan’s Surf City disco in Sydney, they would appear on Bandstand and Saturday Date, and soon be performing in front of 60,000 fans at the Melbourne Myer Music Bowl, and the rest was rock and roll history, as the “scream years” of the beat era resounded around the country. Seventeen-year-old Billy Thorpe was at this time ensconced in a Kings Cross apartment with not one but two girlfriends, Natalie Reminoff and Pepper Walker, nightclub dancers, who enjoyed a close relationship with the reigning King of Surf City, during the hectic early months of Billy’s pop music career. In 2009 co-composer Jerry Lieber confirmed that the “poison ivy” referred to in the song, was a metaphor for a sexually transmitted disease, and on a less profound note, that he was proud to have written the only rock song with the words “calamine lotion” in the lyrics.

Mashed Potato Yeah was released in August ’64 as the immediate follow up to the phenomenally successful Poison Ivy and despite its unimaginative lyrics – simply repeating “Mashed Potato Yeah”, 172 times – it went top 10 nationally on the strength of the beat fever momentum sweeping the country, it was suggested that at the time the Aztecs could have recorded excerpts from the Pink Pages telephone directory and it would have been a hit, such was their unprecedented popularity. A slightly different version of this song had been recorded in the USA by Nat Kendricks and the Swans in 1959, and introduced the dance steps for the Mashed Potato, which were no more complex than the lyrics to the song.

Mashed Potato was written by Dessie Rozier, a pseudonym used by James Brown who was concealing his identity as he was in dispute with his record company at the time. The song was originally an instrumental dance number that formed part of Brown’s stage act and Miami DJ Carton “King” Coleman dubbed over the Brown vocals in the final mix. The song was also covered by Rufus Thomas in 1963, adapted by Dee Dee Sharp as Mashed Potato Time in 1962, and by the Searchers as well, when they included their beat version of the song on an album entitled Live At The Star Club. This was most likely the version that influenced Billy Thorpe as he would have been aware of another Searchers song which he lifted from the same album, the band’s next single, Sick and Tired.

The group continued to successfully mine the covers market with this frantic beat remake of the hit for Fats Domino in 1958 (#22 US and #26 UK), again the song had been given the beat treatment by the Searchers on their Live at the Star Club album and the Aztecs scored their third hit when they took Sick and Tired to #11 nationally. The song was originally a delta blues number with the same name, recorded by the Harlem Hamfats and written by that band’s guitarist Joe McCoy. This Dave Bartholomew and Chris Kenner version  of the song owes a debt both musically and lyrically to McCoy’s song, but he is not credited, Kenner released his version in the US in 1957 but it was not a hit, Kenner would later score with I Like It Like That, Part 1, a #2 US hit in 1962.

Billy Thorpe would continue to mine the covers market successfully in future years and remained the most prominent singer of Australia’s post-Beatles beat music era.