Harry Belafonte was the most famous Calypso performer of his generation, hits like Jamaica Farewell, The Banana Boat Song (Day-O), and Island in the Sun, ensured chart dominance in the mid-1950’s. Mary’s Boy Child was his most successful Christmas song, written by Juilliard-trained West Indian Jester Hairston, it tells the story of the birth of Jesus, and was performed by Belafonte using the patois and vocal cadences of West Indians. Although Belafonte was born in Harlem (NYC) of West Indian parents, his vocal interpretation of this song was unfairly criticised at the time for being disingenuous and pandering to white audiences by appropriating West Indian cultural traditions in a demeaning way. 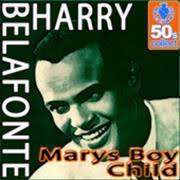 When Mary’s Boy Child climbed to #1 in the UK, Belafonte became the first black male to have a #1 in the UK, the first to sell a million copies in the UK, and the first ever British #1 record to have a playing time that exceeded four minutes (4:12). He took it back into the charts again in 1959 and 1960, and a slightly modified cover version entitled Mary’s Boy Child /Oh My Lord by Bony M was a  #1 hit in 1978, and went on to become the 10th biggest-selling single of all time in the UK.

When John Farnham performed two songs at Melbourne’s Carols By Candlelight in 2012, he was the most successful solo male performer in the country, after completing a remarkable run of successive #1 albums commencing in 1986 with Whispering Jack, followed by Age of Reason, and Chain Reaction, a multitude of top ten singles, a starring role in Jesus Christ Superstar, and recorded duets with Kate Ceberano, Jimmy Barnes, and Human Nature. His popularity was unparalleled, and he was the only Australian artist to have number-one records in five consecutive decades (equalling the achievement of Sir Cliff Richard in the UK).

A massive audience had gathered at the Sydney Myer Music Bowl in Melbourne for the much-anticipated performance of seasonal favourites, Farnham was joined on stage by his trusted harmony singers Lindsey Field, Venetta Fields, and Lisa Edwards, backed by a full symphony orchestra with a stunning backdrop of seasonal icons framing the four performers. Farnham is a gifted tenor singer who has great control, intonation, and stagecraft, and his rendition of Mary’s Boy Child was dramatic and affecting, and for good measure he threw in his moving version of the hit song from the musical Carousel, better known as the Liverpool FC club song, You’ll Never Walk Alone.  The version by Gerry and the Pacemakers from 1963 is the most popular, and throughout the period of the COVID-19 pandemic it has become widely acknowledged as the anthem for medical staff, first responders, and those in quarantine.