Retro rock was rife in the early 70’s, music festival acts were doing loud, extended versions of hits by Eddie Cochrane, Gene Vincent, and Jerry Lee Lewis, Johnny O’Keefe had made a triumphant return to Sunbury in 1972. John Lennon released his solo album of golden oldies, Rock and Roll in 1975, and 50’s nostalgia peaked with the movies American Graffiti, Grease, and the television series Happy Days, all were perpetuators of the myth that this bygone era of innocence and naivety, was the font of all that was honest and valid in rock music. 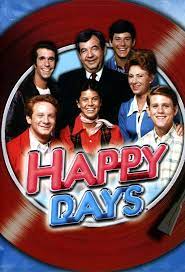 In 1976 Ol’ ’55  took their original composition On The Prowl to #14 and quickly followed up with the doo wop ballad Looking For An Echo which took the band into the to ten for the first time, and they would round off the year with their third consecutive hit, and their biggest.

(I Want A) Rockin’ Christmas, written by their manager Glenn A Baker and Jim Manzie, and recorded in the Trafalgar Studios in Sydney with producer Charles Fisher, it is one of the best yuletide rock and roll hits, that captures the spirit of Xmas, and the longing to be with the ones you love. The song had a great arrangement, layered instrumentation and multi-part harmonies, that were evocative of and inspired by the work of Phil Spector’s classic 1963 album A Christmas Gift From Phil Spector. While the song is about a couple who are separated at Christmas, it is very upbeat musically, with yuletide bells and whistles in the mix, and harmony inserts which included excerpts from Silent Night, Oh Hallelujah, and Deck The Halls, it soared to #7 locally and stayed in the top ten for several weeks after Christmas, the B-side was a cover of the Beach Boys seasonal hit Little Saint Nick.