Justice Crew were certainly changing; the original nine members were now seven following the exits of “Scrap” Kamara and “Kid Taz” Repousis in 2011, and they were evolving musically and theatrically, the earlier preoccupation with hip hop music had been replaced by songs with a greater pop sensibility, as the key vocalists in the group, John, Len, Solo, Lukas and Paul matured as performers and became more confident, and willing to experiment with different vocal styles. They still performed their trademark flips, spins, and acrobatics but it was no longer the focus of their act. They more purposefully embraced the look and sound of typical boybands of the period as their songs increasingly merged more sensitive lyrics with urban grooves, while still celebrating life, friendships, partying, and good times, and all autotuned to a glossy finish. Below- Justice Crew reveal their buffed bodies and ever-expanding gallery of body art.

As Justice Crew moved ever closer to genuine boyband status, they would be competing with many similar groups around the world, as a steady stream of rippling abs, perfect hair, and steamy, snake-hipped performers commanded legions of fans. The one-size-fits-all definition of boybands was nebulous, as most did not play instruments but some did (5 Seconds of Summer), some danced but others didn’t (One Direction), their music was either rock (5SOS), rhythm and blues (Boyz II Men), pop (BTS) or hip hop (Wu-Tang Clan) but one thing was for sure, it was a burgeoning market and if Justice Crew could break through globally, they would enjoy unprecedented success outside Australia. Below L-R – One Direction, Wu-Tang Clan, 5 Seconds of Summer. 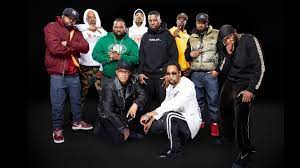 The local popularity of Boom Boom encouraged the group to release the song in the USA but it failed to chart there, in 2013 they lifted the second single from their yet-to-be- released debut album, it was Best Night, a song about hedonism and the partying lifestyle, ” Whatever’s on your mind/Go ahead and do it now/Let’s make tonight the night/Come on let’s f..k around/Let’s just go all the way/And leave you no regrets…”, if you were in any doubt about that, then the raunchy video of the boys cavorting with bikini-clad models on a motor launch would have confirmed the inspiration for the song. It was catchy, and Lukas delivered his trademark rap insert, it charted #7 here and #24 in NZ and notched up sales of 140,000, the music vid was really just a home movie shot without a budget or any artistic pretensions, aboard the aforementioned love boat.

Everybody became the third single to be pre-released from the debut album in October 2013, it was written in Los Angeles by Justice Crew members and US tunesmiths Danny Mercer and Jackson Morgan while the group were on tour with Pitbull and Kesha in North America. The song was essentially dance pop with lead vocals by Solo and the twins John and Len, the lyrics were predictably about letting the good times roll and the promo vid was a dance party interspersed with some break dancing, head spins, krumping, and the appearance of a group of professional female dancers. It was hip hop-lite, and the music and videos of Justice Crew were becoming somewhat monotonous and repetitive, but this one still resonated with their fans and it climbed to #6 locally, #26 in NZ, #18 in South Korea and sold 140,000 CD/digital copies.

They would begin the #Hype Tour of Australia in April 2014, one month before the release of Que Sera, a mid-tempo dance pop song which showcased the lead vocals of John and Solo and the rapping of Lukas, it was a more restrained boyband-style of song with an easy, funky vibe, and relatable, inspiring lyrics about friendship and trust “At the end of the day Some you win, some you don’t/ So I’m glad that I’m here/ With some friends that I know…”.

It would ultimately hold down the #1 spot for 9 consecutive weeks and set a record that had stood since the 1980’s when Kylie Minogue (Locomotion), Pseudo Echo (Funky Town), John Farnham (You’re The Voice) and Austen Tayshus (Australiana), all shared the record with 7 consecutive weeks at #1. That record would later be comprehensively beaten in 2019 when the Tones and I megahit Dance Monkey topped the ARIA Top 40 charts for 24 consecutive weeks. Still Que Sera sold 350,000 CD/digital copies and became the second #1 hit for Justice Crew.

By October 2014 the group were about to pre-release their fifth consecutive single from the album Live By The Words, it would be Rise and Fall, the first song completely written and produced by the group, and it continued their shift away from the house music sounds of hip hop towards softer pop/rock cadences that they had flagged with Que Sera. John Pearce described this song thus “…we are exploring a whole new side to Justice Crew. It’s got a sort of “love” meaning behind it…it is a romantic song, but the lyrics are really metaphorical.” Life’s a rolling wave/Your heart can keep me safe/Tonight I’m floating toward my home…”, and while the wordplay which invoked the elements of fire and water were commonplace metaphors for capturing the intensity of a relationship, it was certainly a step up from the banality of “life’s a party so hit the dancefloor”.

Rise and Fall would be prophetically-named, as it would chart outside the Top 10 and plateau at 30,000 sales, and be the last hit for the group. They would ultimately and somewhat belatedly release their debut studio album in November 2014, but its sales stalled at #7 as all the big hits on it had already been pre-released as singles, and the one new track not pre-released from the album, I Love My Life, stalled at #68 when ultimately released. The band headed back on the road in January 2016 with the Live and Local Tour and later in that same year the What We Do Tour in September/October.

By now the group were a quintet following the sacking of Emmanuel “E-Man” Rodriguez in 2014, leaving John and Len Pearce, Solo Tohi, Lukas “Wildrok” Bellesini, and Paul Merciadez as the core members, subsequent singles Good Time (2015), Pop Dat Buckle (2016), and So Long (2019) all failed to chart, in 2019 the troupe competed in the America’s Got Talent: The Champions Season, but were eliminated in the first round, their last records were released independently by the group as they were no longer signed to Sony or a major record label. Below- The evolution of John Pearce from tattooed hip hopper and underwear model, to Purple Wiggle. 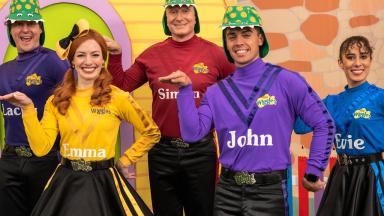 Post Justice Crew the troupe members have headed in different directions, John Pearce has become a Purple Wiggle, his brother Len is a DJ/producer, and music streamer, Lukas Bellesini has started a family with his partner Kiara Reynolds, and Paul Merciadez promotes fitness and workout programs via Instagram. Below L-R – Len Pearce, Lukas Bellesini and Kiara Reynolds, and Paul Merciadez. 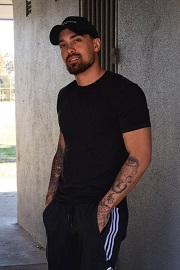 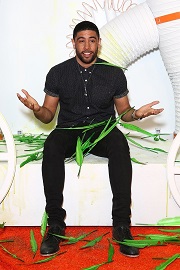 In 2019 police began investigations into an alleged email fraud ring involving forged invoices to the value of $2.6m, four people were arrested and charged in 2020 with knowingly dealing with the proceeds of crime. These included former Justice Crew member Omar “Scrap” Kumara, and his alleged co- conspirators Ifeanyi Nzeribe and two women, fourteen charges were made against Kumara over the alleged scam that had been ongoing for fourteen months. Below L-R – Omar “Scrap” Kumara and arresting police, Kumara handcuffed between two detectives at court, and co-defendent Ifeanyi Nzeribe. 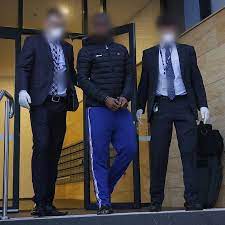 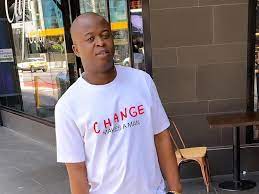