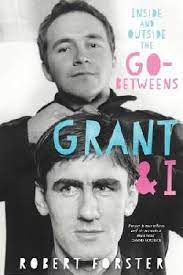 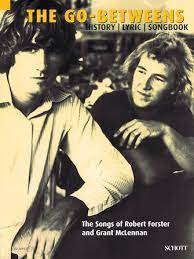 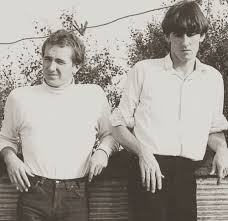 Brisbanites Grant McLennan and Robert Forster (above x3) met in English classes at at the University of Queensland in 1977, Grant wanted to pursue a career in film and couldn’t play an instrument, Robert was focused on music and already a capable guitarist. Robert suggested they form a band, and he would teach Grant to play guitar, Grant agreed and the bromance that would be the creative core of the Go-Betweens was forged. The 1953 novel The Go-Between by L P Hartley was the inspiration for the band’s name, a Gothic tale of love, sadness and death, but also sexual awakening, via the passing of handwritten notes from a man to a woman via an intermediary. Their musical influences were diverse, Abba, David Bowie, Creedence Clearwater Revival, The Easybeats, and the Velvet Underground “they (the Velvets) were the first band I ever heard who wrote songs better than they could play them”, Forster remarked. Below L-R the original quartet – centre photo- Lindy Morrison, Robert Vickers, Grant McLennan, Robert Forster, and the quintet at far right – Amanda Brown, John Willsteed, Grant McLennan, Lindy Morrison, and Robert Forster. 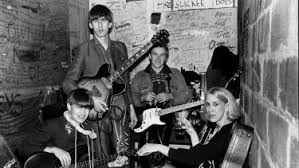 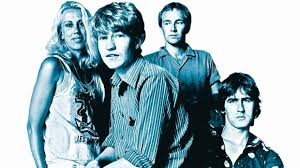 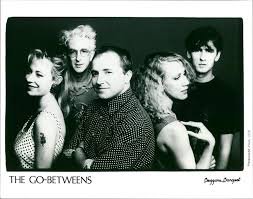 Brisbane’s The Saints were their local template for success as Robert Foster remarked in his memoir Grant And I “The steps were glass-clear and majestic – record a classic first single, send it overseas, and get signed to a London label for a multi-album worldwide deal. Voila! For a band of dreamers, which the Go-Betweens were, here was our shining path.” 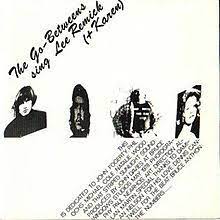 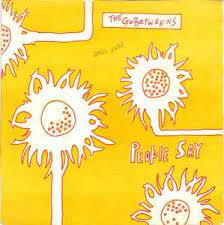 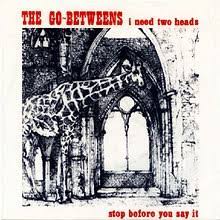 Arriving in London in 1979 on the strength of their two Able Label indie singles, Lee Remick and People Say they faced a brick wall – the patronizing indifference, antipathy, and disdain of the British music industry. But fortuitously Edwyn Collins of the Scottish indie label Postcard Records, noticed  their single People Say in a London record store, located the band in a nearby hotel and invited them back to Glasgow, to record their third single, I Need Two Heads, which reached #6 on the UK independent charts. The band at this time were Lindy Morrison (drums, vocals), Robert Vickers (bass, vocals), Grant McLennan (guitar, vocals), and Robert Forster (guitar, vocals). 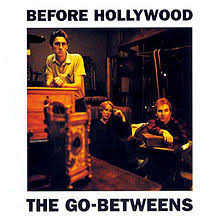 They were highly regarded in Europe and their albums were critically praised but generally commercially unsuccessful, their breakthrough album was 1983’s Before Hollywood, produced by John Brand (Aztec Camera, The Waterboys) and contained some of the  bands most beloved songs, notably McLennan’s Cattle and Cane, Forster’s By Chance, while Lindy Morrison’s drum part on A Bad Debt Follows You. was particularly memorable. 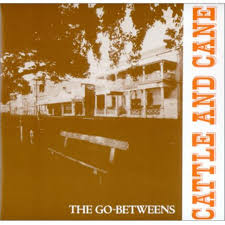 Cattle and Cane was lifted from their Before Hollywood album and despite poor initial sales it has become a genuine Australian classic. The song is full of evocative imagery from McLennan’s youth, he was a boarder at the Church of England Grammar School in Brisbane, and would return by train to see his mother on term vacations. There is a dreamlike atmosphere about the journey he takes home from school in northern Queensland, as the song reveals itself to be an autobiographical postcard to McLennan’s mother who had raised him after his father passed away. “A schoolboy coming home through fields of cane/To a house of tin and timber/And in the sky a rain of cinders.” 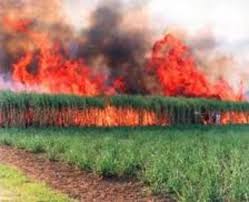 There is a languid, hypnotic, nostalgic, feel to the lyrics but the song never becomes sentimental nor overwrought, the wistful lyrics are often spoken rather than sung and recalled the work of the Velvet Underground, who the band admired and sought to emulate, as well as the Stranglers. Composed on a borrowed guitar in Nick Cave’s London flat by a homesick McLennan, it was recorded in the UK and featured the unusual chord structure for which the band were renowned, beautifully elegant acoustic/electric guitar arrangements and drummer Lindy Morrison’s pivotal time signature.

Grant McLennan provided lead vocals on the first three verses of the song, which charted his rites-of-passage from childhood to adulthood, while the fourth and final spoken word verse, when McLennan and Forster first meet at university, is sung/spoken by Forster. Since its release the song has become a revered classic and was rated one of the best Australian songs of the period 1926-2001 by APRA.

When Edwyn Collins reviewed the song for Melody Maker in London he said of Cattle and Cane “There’s a line there that’s so evocative of childhood,” he wrote, “about leaving his father’s watch in the shower – I can’t explain what that line is about, but it’s just haunting.” McLennan’s father had passed away and the watch was a cherished memento of his dad, which Grant had inadvertently left in a public shower and never recovered. Other songs by McLennan were also characterized by a sense of loss, Dusty In Here, and Bye Bye Pride, evoked feelings of yearning and nostalgia which reflected in the words and music. 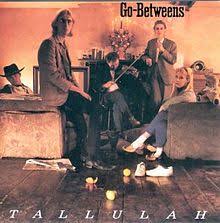 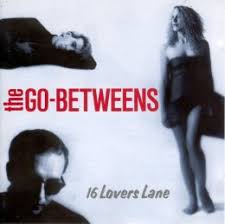 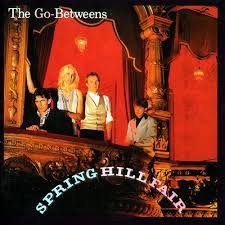 In a Hitchcockian-style quirk, the Go-Betweens liked to include a double L in the title of all their albums before the group disbanded in 1989, and subsequently re-formed with only Forster and McLennan a year later – Send Me A Lullaby, Before Hollywood, Spring Hall Fair, Liberty Bell and the Black Diamond Express, Talullah, and 16 Lover’s Lane 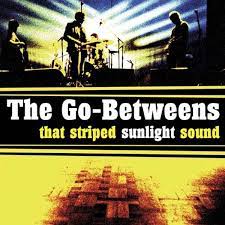 The promo clip features Robert Vickers on bass and McLennan and Forster on guitars, Lindy Morrison on drums, it was shot on a set comprising an artfully ramshackle shed with slatted boards through which shafts of light penetrate, partly illuminating the performance and depicting the musicians in shadow throughout. While Bob Dylan has described the underlying “thin wild mercury sound” of his music, the Go-Betweens moody, beguiling and melancholy pieces are an aural and visual evocation of their “striped sunlight sound”, an expression that Forster has used to describe the music of the Go-Betweens. In 1986 multi-instrumentalist Amanda Brown (oboe, violin, and vocals), who was McLennan’s partner, joined the band and in 1987 John Willsteed replaced Vickers on bass. Below L-R – McLennan, Forster, Willsteed, Morrison, Brown. 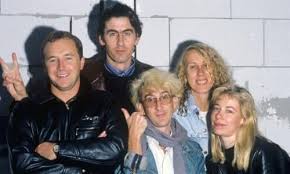 Cattle and Cane was added to the National Film and Sound Archives – Sounds Australian” category, as “a song that was a culturally and aesthetically significant sound recording”, and at the time Robert Forster added: “The inclusion of Cattle And Cane to Sounds Of Australia is a highlight of the Go-Betweens’ career, and a further testament to the vision of the man who wrote it – the late Grant McLennan (who passed away in 2006) 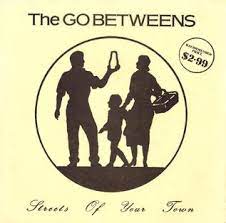 The album 16 Lover’s Lane would be the last that the lineup of McLennan, Forster, Morrisson, Brown and Willsteed would create, and the standout track was the elegantly beguiling Streets of Your Town,  an apparently sweetly innocent and even sunny song composed by Grant McLennan, which has a deeper and more profound purpose – to highlight the issue of domestic violence in suburbia with the reference to “battered wives”. The recording was a very polished production and featured a wistful Spanish-inflected acoustic guitar solo by bassist John Willsteed, and affecting vocals by Amanda Brown and McLennan. This was one of the few Go-Betweens songs which McLennan did not collaboratively write with Forster, and relationships within the band were fracturing; McLennan was by now using heroin, Willsteed was drinking heavily, and the new album was being referred to as the “the indie Rumours”, paralleling the famously schismatic goings-on within Fleetwood Mac when they were writing and recording their most famous album.

Forster and McLennan would wind up the band a year later, this would not only end the musical partnership between the members but also the personal relationships between Robert Forster and Lindy Morrison and Grant McLennan and Amanda Brown. Forster and McLennan would continue to perform with a re-constituted Go-Betweens in the future, but the split with Morrison and Brown was ultimately revealed to be acrimonious, emotionally fraught, and involved a dispute over songwriting credits and sharing of royalties.

The song beautifully displays the contradictory nature of McLennan’s songwriting, sweet melodies counterpointed with tough lyrics, building an all-encompassing dreamlike ambience which is reinforced by crystalline acoustic guitar riffs, it charted #70 locally and #30 in NZ. Despite poor sales in Australia the band was held in high regard throughout Europe, and in 1996 the French magazine Les Inrockuptibles voted their album 16 Lovers Lane the third best album of the 1980’s after The Smiths The Queen Is Dead, and The Pixes Doolittle. 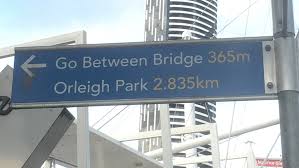 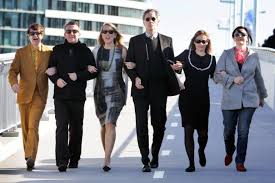 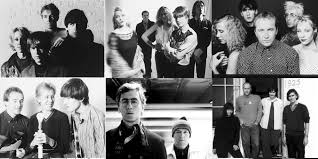 In 2010 former band members (above L-R- Vickers, Willsteed, Morrison, Forster, Brown, and Adele Pickvance (bass player from 1996), would walk together across the newly-opened Go-Betweens Bridge in Brisbane, named in their honour, and hopefully remember their former bandmate Grant McLennan who passed away in 2006, and the good times that they had shared in the streets of their home town