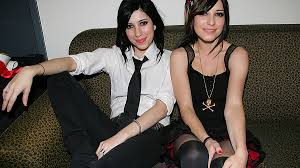 The Veronicas were poised to break out internationally, they had formed a successful working relationship with Toby Gad and they hunkered down at their Los Angeles base with the German producer/songwriter around his Mac computer, to put together their second album, Hook Me Up.

The themes were based on the personal relationships of the twins and focused on love, jealousy, breakup, revenge, and for the first time, same sex attraction in Take Me On The Floor. It would not be too long before Jessica would reveal that she was in a relationship with high profile Australian gay personality Ruby Rose, although she would subsequently have relationships with men including Billy Corgan of the band Smashing Pumpkins and Badflower guitarist Josh Katz, before reuniting with Rose in 2016, but then breaking up again quite acrimoniously. Below – Ruby and Jess (2), Ruby and the twins.

The album tracks artfully combined the punky girrrl power vibe of 4Ever with the more slinky, sleazy discobeats of Hook Me Up, it was a winning combination chart-wise and the first single taken off the album was the title track.

Written by the Veronicas with two of their favourite North American songwriters Shelly Peiken who had written hits for Christina Aguilera, Meredith Brooks and Mandy Moore, and Greg Wells, whose hits had sold over 90 million copies for such artists as Adele, Keith Urban, Katy Perry and Kelly Clarkson, it would become a dancefloor banger, and further consolidate the growing reputation of the girls.

Hook Me Up had a retro sound, very 1980’s synth pop with a Kylie techno beat and sampled elements from Soft Cell’s 1981 hit Tainted Love. Synthesized guitars, keyboards and drums projected a classic electropop dance vibe, the vocals were sassy and confident, although the lyrics didn’t stretch the imagination too much. Some people read drug references into the “getting hooked up” lyrical content but it was more prosaic than that, and was really about escapism, and release from the pressures of everyday life and the commitments therein, through personal relationships and life experiences.

The synth hooks were particularly infectious, the harmonies were catchy and breathlessly sexy, and it was an instant hit, climbing to #2 locally and the promo video, featured the girls leading a revolt at a boarding school in a Cruel Intentions meets Heathers kind of mashup.

The second single lifted off the album was the Toby Gad/Veronicas composition Untouched, lyrically it captured the feelings of isolation and the tyranny of distance that the Veronicas were feeling, given that they had relocated from Australia to Los Angeles back in 2005 and were missing friends and loved ones.The song is fast-paced driving synth-rock, which deftly used intimidating strings to set a raunchy beat beneath stuttered verses, and an engrossing refrain, it was the most convincing track on the album, and was compared by some to the best songs by Pink and Avril Lavigne.

Untouched became an epic dancefloor hit, charting #2 in Australia, #19 in the US, #9 NZ, #8 in UK and #1 in Ireland, the first time the Veronicas had hit #1 outside Australia. The album was also successful climbing to #2 locally, #8 in NZ, #33 in Ireland, #35 in UK and #41 in Mexico, and the single hits kept coming with the release of This Love, a dance-rock composition by Toby Gad and Kesha Sebert which described a long -distance relationship and the commitment by the couple to sustain their connection despite being physically apart. 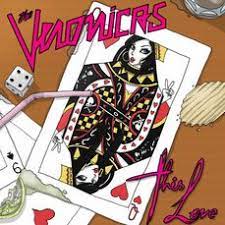 This song continued to mine the rich seam of electropop dance hits for the Veronicas with a surprise twist towards the end of the song as a blissful synthesizer countermelody was unleashed, which owed a debt to a-ha’s 1985 hit, Take On Me, it charted #11 locally and #14 in NZ and was a minor hit for the girls.

The fourth and last song lifted from the album was Take Me On The Floor, another Gad/Veronicas composition, the lyric “I wanna kiss a girl, I wanna kiss a girl, I wanna kiss a boy’, was controversial and was the first time that the twins, or indeed Jessica specifically, had referred to gay relationships in public. The song was not groundbreaking for the Veronicas, but it was radio-friendly synthpop with a highly danceable electronic groove and was favorably compared to Lady Ga Ga. They embarked on their Revenge Is Sweet Tour, but the teen pop momentum was starting to ebb for the Veronicas, Lisa would break off her engagement to Australian Idol contestant/Neighbours star Dean Geyer in 2008, and the twins would temporarily disband and take time out to explore their future directions both musically and personally, before re-emerging in the 2010’s.