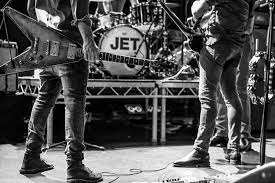 Brothers Nic and Chris Cester grew up in Dingley Village, in Melboune’s suburban south-east, and attended St Bede’s College , Mentone, listening to their father John’s collection of classic British and American rock music from the 1960’s and 70’s – Beatles, Rolling Stones, Small Faces, Motown, as well as local hard rock icons AC/DC and the alternarock of You Am I. They were particularly inspired by the seminal 1995 album Hi-Fi Way, of which Nic Cester remarked- 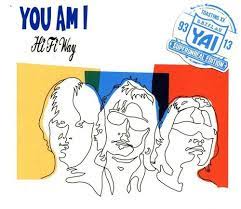 “ That was the record that made you realise you could be in an Australian band, you didn’t have to be a grunge band and you didn’t have to be influenced by American bands. It changed everything”. (Tiffany Baker, Daily Telegraph Nov. 2010). Below -Left to right below – Cam Muncey (guitar/vocals), Mark Wilson (bass guitar), Nic Cester (vocals/guitar) and Chris Cester (drums/vocals).

Nic and Chris Cester, then hooked up with Fellow St Bede’s schoolmate Cam Muncey and with the addition of Mark Wilson, the classic Jet lineup was complete, the tradition of brothers founding great rock groups in Australia is well documented. 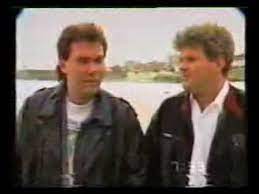 Above L-R The Bee Gees (Barry, Robin, and Maurice Gibb), INXS (Tim, Andrew, and Jon Farriss), Dragon’s (Todd and Marc Hunter), and below L-R Crowded House (Tim and Neil Finn), Angels (John and Rick Brewster (2nd from the left and 2nd from rhe right in the llineup), AC/DC (Angus and Malcolm Young), as well as Col Joye and the Joy Boys (Col and Kevin Jacobsen), and the Badloves (Michael and John Spiby) and many others who have contributed to the rich musical heritage of Australia, the Cesters were looking to add to that tradition. 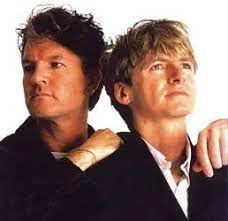 Their band name was inspired by a Paul McCartney and Wings song title, on the album Band on The Run, and Jet would begin gigging at the Duke of Windsor Hotel where Dave Powell noticed them and became their manager, they released their debut EP Dirty Sweet, the lead single Take It  Or Leave It,  a thumping serve of pub rock, and they were quickly signed to Elektra Records in 2003.

Jet were unapologetically retro and happy to plunder the back catalogues of Motown and the British Invasion bands to deliver heart-on-the-sleeve hits that rocked and awoke fans from their grunge-induced ennui of the previous decade, they were hailed as the AC/DC for the new millennium. Below Dave Sardy

The band went into the Sunset Studios in Los Angeles in 2003 with producer Dave Sardy (Marilyn Manson, Dandy Warhols) to record their debut album, Get Born, named after the struggle they had endured to get rhis far, it was a revelation, bristling with hits and brimming with mod rock machismo, it divided the critics, but the fans loved it.

The first single released was the pop perfect Are You Gonna Be My Girl, from the opening seconds when Nic Cester clears his throat, the thumping bass intros, tambourines seep in from behind, drums grab your attention, and Nic exhorts the band to “Go!” and the countdown starts – “So one, two, three, take my hand and come with me/ Because you look so fine/ That I really wanna make you mine.”

Funk Brothers rhythmic attack, Motown tambourines, epic pauses, and outrageous rock riffs augmented by producer/guitarist Dave Sardy, that tumbled over and over, “Big black boots/ Long blond hair/ She’s so sweet/ With her get back stare,” it created an instant anthem for the summer of 2003, and was picked up by Apple to promote their iPod, as a black shadow girl is connected to a white iPod while grooving to the song.

The naysayers started their critical attack with the album cover which was deemed to be a rip-off of Klaus Voorman’s Grammy-winning artwork for the Beatles 1966 album Revolver, tracks such as Look What You’ve Done, a scathing indictment of John Cester, the brothers’ father who had cheated on their mother, was claimed to owe a debt to the Beatles Sexy Sadie and/or Fool on the Hill,while Chris Cester’s tribute to Cam Muncey’s deceased brother, Timothy, was also said to have pilfered lyrics from Sexy Sadie.  Below L-R Revolver artwork, father John Cester, Iggy Pop Lust For Life.

The most virulent criticism however was reserved for the big hit single, Are You Gonna Be My Girl, when it was claimed the song was derivative of Iggy Pop’s Lust for Life and the White Stripes Screwdriver, but it’s easy to argue convincingly, that the song has more in common with such Motown songs as You Can’t Hurry Love by the Supremes and I’m Ready for Love by Martha and the Vandellas. But the whole derivative argument seemed pointless, Iggy Pop was on record as admitting that he and David Bowie were strongly influenced by Motown riffs and rhythms when they wrote Lust for Life,and seminal artists such as, the Beatles, Rolling Stones, Animals, Led Zeppelin and Van Morrison’s early songs were clearly derivative of black music. 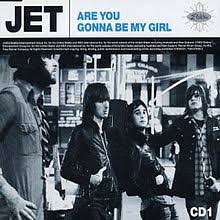 As Paul Kelly said in his memoir How To make Gravy “Some people continue to be surprised by this (composers borrowing material from other artists songs), people have these notions of the artist as some kind of self-dredger, dragging precious originality up from the depths of his soul … self-expression is overrated, though. There’s so much of it around these days. A good line is worth using again. And again”. Clearly the public agreed, and simply enjoyed the rebirth of all those magical Motown cadences in this song, riffs and hooks and lyrics have always been borrowed/appropriated, and it’s not so much  what you borrow, it’s what you do with it that counts, just listen to great exponents of rap and hip hop to appreciate the innovative ways that sampling has been used since the 1980’s.

Are You Gonna Be My Girl peaked at #12 locally, #28 in 2003, and #16 in the UK when re-released a year later after being featured in a Vodaphone messaging TV commercial and #29 in the US, it was such an adrenaline rush of a single, and became an instant live performance favourite.

The second single released from the album was Rollover DJ, which was another punchy slice of retro garage rock which featured the legendary Billy Preston, once known as the “Fifth Beatle” on keyboards. Preston was the only person to be co-credited on a Beatles record – Get Back- and he appeared with the Beatles in their final live performance on the roof of the Apple Building at No. 3 Savile Row, London in 1969. Billy Preston sadly passed away in 2006, but left us with such solo classics as Nothing from Nothing and That’s the Way God Planned It.The song ridicules DJs who dominate supposedly live musical events, to the exclusion of the bands, “Well I know that you think you’re a star/ A pill poppin’ jukebox is all that you are/ So tell me it ain’t that way/ What’s your name?’

The song charted #32 locally, #34 in the UK and #14 on the US Billboard Alternative Songs and Hot Mainstream Rock Tracks charts, the album Get Born was a genuine international hit, #1 locally, #17 in the UK and #26 in the US and has racked up total global sales in excess of 4 million copies. Below Billy Preston with George Harrison.