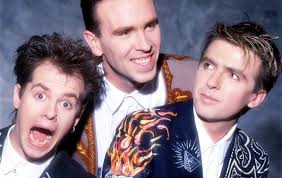 Crowded House were formed in 1984 when Paul Hester and Neil Finn, who were former Split Enz bandmates, performed together on the Enz With A Bang farewell tour and met and recruited bassist Nick Seymour and guitarist Craig Hooper. The band was initially known as the Mullanes, which was Neil’s middle name, and his mother’s maiden name. They signed with Capitol Records but not before Hooper had departed and the band name was changed to … the Largest Living Things … Finn’s choice of band names was seriously weird, but they ultimately came up with a name that described their squeezy accommodation at the time at 1902 Nth. Sycamore St Los Angeles, and thus Crowded House was born. 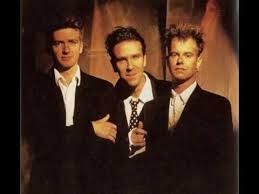 The band relocated to the US to record their eponymous debut album Crowded House with Mitchell Froom, Neil Finn was the undisputed leader of the group and the creative dynamo that drove the band to its early international success, neither Hester nor Seymour would emerge as credible song writers, and Paul Hester described the dynamic within the band as “Two dorks and a dictator”. Yet there was an unmistakable chemistry about the trio that found its ultimate expression in the dreamy pop masterpieces that they created and performed, Rolling Stone’s Chris Willman described their debut album thus “Rarely has any modern music sounded so cheerful and so creepy as some of the off – centre pop songs that pop out of the red head of Neil Finn… It’s great, nervous pop”.

Mean to Me was pre-released only in Australia before the polished Crowded House album was issued,  the song  revealed the extraordinary breadth of Neil Finn’s songwriting talents, and was inspired by a female fan of Split Enz who had become disillusioned with their music, and had stalked Neil back to NZ to complain to him personally The Richard Lowenstein promo video simply featured the band playing the song in a warehouse while continuously mouthing the words “…I love you…”, it also namechecks the NZ town of Te Awamutu, Neil Finn’s birthplace, and it was a local breakthrough hit charting #26 in June ’86 and spent 15 weeks on the charts.

Surprisingly the second single lifted off their debut album was Now Were Getting Somewhere, but they weren’t with this one. The recording of the song was controversial, Neil was the only member of the band to play in the session, both Hester and Seymour were excluded from the studio while session musos drummer Jim Keltner and bassist Jerry Scheff, laid down the track. One can only imagine the angst felt by Finn’s two bandmates, and to some extent they were justified, when the record stalled locally at #63.

This would not be the last time that Hester and Seymour would feel excluded from the creative/recording process, in 1991 the Finn brothers Neil and Tim, began to collaborate on songs for an upcoming album using other musicians, notably Ricky Fataar on drums, and apparently looking to release a Finn Brothers album and not a Crowded house album. Their record company Capitol stepped in and the project quickly became the House’s third album Woodface, it was better for having pooled the siblings’ creative energies, but not great for inter-band relationships and group solidarity within CH. 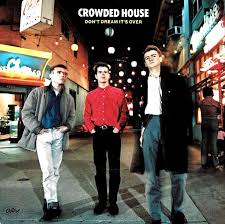 Don’t Dream It’s Over was incredibly the third single lifted from the album, it is essentially an exquisite Beatle-esque love song with a dreamy ambience and surrealistic, slightly opaque lyrics, as a boy describes to his lover that obstacles should not keep them apart, to continue dreaming and moving forward together – never believing that the relationship is over- ”There is freedom within/There is freedom without/ Try to catch the deluge in a paper cup/ There’s a battle ahead/ Many battles are lost/ But you’ll never see the end of the road/ While you’re travelling with me,” and then we are carried forward to the gorgeous and irresistable sing-a-long chorus “hey now, hey now…”.

It was a romantic ballad with a solid beat and sinuous bassline, underscored by Mitchell Froom’s Procol Harum-inspired spectral Hammond organ solo. Finn has claimed that the lyrics materialized effortlessly, as he idly fingered the piano keys, but there are obvious parallels between this song and the Beatles Across the Universe, which includes the lyrics “ words are flowing out/ like endless rain into a paper cup.”

The recording of this song would also exclude both Seymour and Hester from demoing the record as Neil did not feel that they had captured the shuffle beat of the song, and only after the arrangement was complete, did Hester and Seymour return to the studio to record the song. Neil Finn felt that his bandmates were crestfallen “…I think you can actually hear the sadness coming through in the track. I think it’s a particularly good rhythm track because they were both smarting a little bit from what had happened,” – cruel and manipulative, or just pragmatic and driven – Nel Finn was capable of being all these things. Below L-R – Mitchell Froom, Jim Keltner, Jerry Scheff.

This innate and uncanny ability of Finn to write and record songs, and his bandmates skill in  collaboratively performing live, was the key to their ultimate success in America, where their early single releases had failed to impress, but after relentlessly touring small venues they established a foothold and a fanbase for their unique sound.

The album yielded four certified classics – Mean to Me, World Where You Live, Something So Strong,and the beautifully crafted guitar pop of Don’t Dream It’s Overwhich hit #2 in the USA, #8 locally and #1 in NZ and Canada, and #25 in the UK, APRA rated this the 7th best Australian song of the modern era, 1926-2001.

Ariana Grande and Miley Cyrus sang this song at the 2017 One Love Manchester concert in memory of those victims of a terrorist attack at Grande’s concert there on May 22nd. The song had originally been inspired by the resilience and belief of people to dream of a unified future and that message resounded around the world that night. The song is now included in the Fleetwood Mac set list since Neil joined the band in 2018, he performs it with Stevie Nicks  and they dedicated it to the victims of the Christchurch mosque shootings at the Fleetwood Mac concert in Hartford, Connecticut, on March 15, 2019 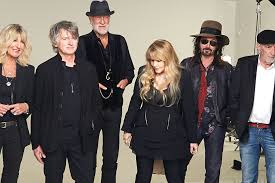