In mid-1984 Kelly (guitar/vocals) and Steve Connolly (lead guitar, vocals) had moved into a large, sparsely-furnished flat on Coogee Bay Rd in Sydney’s eastern suburbs, with Michael Barclay (drums), and Michael Armiger (bass); Peter Bull (keyboards), and Chris Coyne (sax) would subsequently come on board and gradually the Coloured Girls started to take shape. Armiger departed after Kelly, Connolly and Barclay embarked on an acoustic tour opening for Australian Crawl and The Motels, and was replaced by Jon Schofield (bass). This became the classic Coloured Girls/Messengers line up for the next seven years, above L-R Michael Barclay (drums), Peter Bull (keyboards), Paul Kelly (guitar, vocals), Jon Scofield (bass), and Steve Connolly (lead guitar), and they would record Paul Kelly’s next four albums – Gossip, Under The Sun, So Much Water So Close To Home, and Comedy. 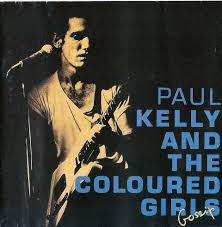 Michael Gudinski of Mushroom Records was losing faith in Kelly, his first three albums – Talk, Manila, and Post – hadn’t sold, and Paul was now proposing to release a double album! Gudinski had always doubted the quality of Paul’s vocals, and was only interested in contracting him as a songwriter for other artists, but he agreed to fund the album for the miserly sum of $60,000 and Kelly agreed, on the condition that it was marketed for the same price as a single album! The band would go into the Trafalgar Studios (Syd) with producer Alan Thorne in March 1986 to record Gossip, a landmark album for Paul Kelly, bristling with potential singles and three of Kelly’s best compositions– Before Too Long, Darling It Hurts, and Leaps and Bounds 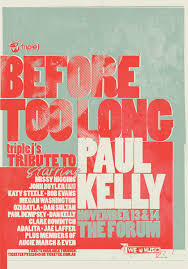 Before Too Long was the first single released by Paul Kelly and the Coloured Girls (the name “coloured girls” was inspired by the term that Lou Reed used to describe his harmony singers on Walk On The Wild Side, “… and the coloured girls go do,do, do, do, do…), later the band would become Paul Kelly and the Messengers to avoid any racist overtones associated with Lou’s reference. When lifted from the Gossip double album. It was a surprise hit, #15 nationally, given Kelly’s lack of success to that time, Gossip was also a chart success at #15 and highly critically-praised, additional harmony vocals were provided by Astrid Munday and Jenny Morris, and Steve Connolly delivered an understated but very effective guitar solo on his Stratocaster, to create the dream-like quality that pervaded this song.

But the lyrics are misanthropic, and reflect the bitter sentiments of a man who is jealous, predatory, and determined  to prise a girl away from her current partner, his unrequited love manifests itself in a barely disguised contempt for their relationship, and he predicts his ultimate success “ Before too long/ The one that you’re loving/ Will wish that he never met you/ Before too long/ He who is nothing/ Will suddenly come into view”
The record’s success was aided by an innovative promo video which featured Kelly as a droll taxi-driver, who although overwrought with working long hours on the night shift and having to deal with difficult customers, keeps his cool, and remains detached from their attitudes and poor behaviour. As Kelly pilots his red XE Ford Falcon “Taxis Consolidated” cab around Sydney, viewers are now reminded of the changes that have been wrought to Darlinghurst, Kings Cross, Centennial Park, Sydney Airport, Bondi Beach, and the city generally, and that “before too long” we may well reflect on these days with the same feelings of nostalgia, tinged with a sense of loss, for a bygone era.

Before Too Long captured all the style and substance of the energetic and intelligent R&R for which Paul Kelly was justifiably known, a love song in a commonplace setting, that you remember because Kelly is the consummate storyteller.

The second single lifted of the Gossip album was Darling It Hurts, co-composed by Paul Kelly and Steve Connolly (lead guitarist) the song tells the story of one of Paul Kelly’s ex-girlfriends who had turned to prostitution and was working the Darlinghurst Road area of Kings Cross, which at the time was a red-light area.

An early reference to the world’s “oldest profession” can be found in the Bible when Rahab of Jericho was identified as a prostitute, and the red -light hooker music genre has a long history since then, with references to sex workers in blues songs pre-dating the modern era including I Got What It Takes (Bessie Smith), Down In The Alley (Memphis Minnie), and Nobody’s Sweetheart (Cab Calloway), which all meditated on the power of “the moneymaker”. 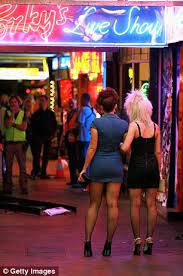 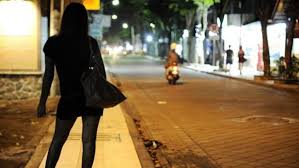 Since then such performers as O.C.Smith (Son of Hickory Holler’s Tramp), Bobby Gentry (Fancy), The Animals (House of the Rising Sun),The Police (Roxanne), La Belle (Lady Marmalade), Donna Summer (Bad Girls), Lou Reed (Walk On The Wild Side), Cher (Gypsies,Tramps and Thieves), Nick Gilder (Hot Child In The City), The Ramones (53rd and 3rd), and locally Richard Clapton (Girls on the Avenue), Nick Cave (Jubilee Street), Jon English (Hollywood Seven) and Sharon O’Neilll (Maxine), and others have continued to musically underscore the lives of these working girls.

The song is a strident pub rocker, Kelly’s vocals are impassioned, angry, frustrated, “I see you standing on the corner with your dress so high/ And all the cars slow down as they see you, driving by/Thought you said you had some place to go/ What you doing up here putting it all on show?”

The song is propelled by the splendid rhythm section of Michael Barclay (drums) and Jon Schofield (bass), the brassy attack by Chris Coyne (sax) and Wayne Freer (trombone), brilliant keyboard flourishes by Peter Bull, and the angsty, stoned-out vocals of Kelly. The monochrome promo clip features the band performing in an industrial setting, a couple jive to the music, but the images seem to be disconnected from the subject matter of the song, a little too amiable and light-hearted, lacking the necessary carnality, grit and menace, normally contingent upon the life of a sex worker. 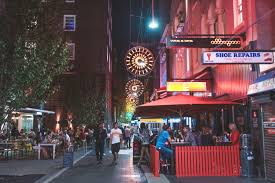 The lyrics however graphically captured their precarious existence, who while supporting pimps, are also often feeding their own addictions ‘…in one hand and out the other, I don’t know why you even bother/ darling it hurts, to see you down in Darlinghurst tonight”. Gutter-crawling customers, pimps, pushers, the ever-present threat of violence, and the use of the song’s title as an oronym of the location Darlinghurst, which Kelly first saw as grafitti on a railway viaduct wall in the area, completed the graphic story that Paul Kelly invariably conveyed in song, charted # 25 locally and #19 in the USA.