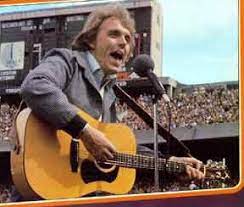 Mike Brady (1948) and his family emigrated from England to Australia in 1959, young Mike was enrolled at St. Joseph’s School in Bay St, Port Melbourne, and became a Collingwood supporter after being placed in a headlock by Fritz, a large boy who demanded total loyalty to the Magpies. 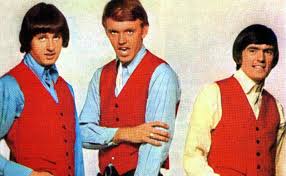 Two decades later, after Brady had tasted success as part of the beat trio MPD Ltd (above), he was approached by Campaign Palace to write a song that would promote the Seven Network’s coverage of VFL football, a song that would match C’mon Aussie C’mon which had boosted Channel Nine’s World Series Cricket in 1978 and hit the top of the charts when recorded by the Mojo Singers . Brady had already written such catchy jingles as Hard Yakka and Lucky You’re with AAMI and knew that he would need to conjure an infectious catch cry that would embody the very essence of our national game. Below L-R South Melbourne FC players L-R -Mark Tandy, Fred Fleiter, Roy Cazaly. 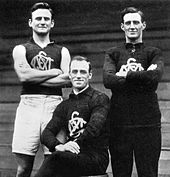 Although it would be fair to say that Mike Brady was not steeped in the traditions of VFL football, he was aware of local footballing legend Roy Cazaly, who had been a star player for both the St. Kilda and South Melbourne Football clubs, a gifted ruckman/forward who soared above packs and took prodigious marks. The cry “Up Their Cazaly” was coined by Fred “Skeeter” Fleiter, a South Melbourne teammate of Cazaly’s, it would resound around the Lakeside Oval whenever Roy Cazaly played, and it was taken overseas by Australian diggers during the First World War. Ultimately the expression slipped into common parlance to describe a particularly spectacular individual sporting contest or achievement, although by the 1970’s it was seldom heard, and Cazaly passed away in 1963.

The inspiration for Brady to re-birth this famous catchcry was Summer of the Seventeenth Doll playwright Ray Lawler, who had written a prequel to the Doll called Kid Stakes in the 1970’s in which  a character known as Sandy Gore liberally used the expression in a broad Australian accent, Brady saw a video of the play and was reminded of the catchcry that had been so much a part of his growing up in and around Port Melbourne. 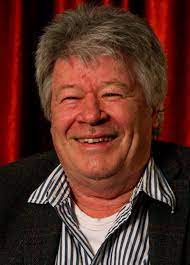 Mike and his offsider Peter Sullivan (above) became the Two-Man Band, they submitted a 75-second version of the song to Channel Seven and sports boss Gordon Bennett was impressed, he developed a video clip with actual highlights of the game, Brady was encouraged to extend the song to two-and-a-half minutes and it soared into the charts climbing to #1 in September 1979, sold 300,000 copies, and the song’s title once again become a part of the Aussie vernacular.

The song was recorded on Ron Tudor’s Fable Records, Brady on guitar, Sullivan on piano, each taking turns to hit a large symphony concert drum, there was no bass guitar and they later layered their vocals and added crowd sound effects from a BBC recording of a soccer match, it was recorded in about one hour! Brady would follow up with several other footy-themed songs with One Day in September (#33 in’80) and There’s A Little Bit of Cazaly In Us All (#37 in ’81), but the magic of the original hit was missing.  Below- Roy Czaly in action.

Up There Cazaly is regularly played at AFL grand Finals, significant key changes to the choruses by Sullivan and the roaring crowd sound effects throughout the song, created a dramatic ambience, and vividly captured the drama, action, and momentumof the game itself, it was one of the 25 biggest-selling records of 1979. The song briefly held the record as the biggest-selling Australian song written and recorded in this country for about one year, until Mike Brady put on his producer’s hat to help Joe Dolce create the international smash hit Shaddup Your Face which sold over six million copies globally and held the record until 2012, when Gotye’s megahit Somebody That I Used to Know clocked up 12 million record sales globally.

A version of Up There Cazaly also became the unlikely club theme song for English county side Derby FC after several Rams supporters attended the 2006 AFL Grand Final and heard not Brady nor Sullivan perform Up Their Cazaly, but a group comprising Darryl Braithwaite, Brian Mannix, John Paul Young, and Shane Howard. Inspired by the song and the tumultuous reaction by the crowd, these supporters set about reworking the lyrics of the song to immortalize Derby star Steve Bloomer, whose statue stands inside Pride Stadium (below) where the old master gazes upon the pitch, and following each Derby FC victory, the theme song Steve Bloomer’s Watchin’, rings out around the ground.

Up There Cazaly has been performed numerous times at the VFL/AFL Grand Final, first in 1979 and most recently in 2021 by Mike and Peter, they will be there again in 2022 on that last Saturday in September, to regale 100,000 people with this iconic song that has become as much a part of the  game as the teams themselves.