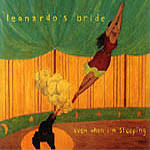 Abby Dobson (vocals) and Dean Manning (guitar/keyboards) formed Leonardo’s Bride in 1992 in Sydney and subsequently added John Gauchi (organ/keyboards), Patrick Hyndes (bass) and Jon Howell (drums) to the group, they were an indie rock/pop band who released their first album, Angel Blood in 1997.

Dobson and Manning were partners when this song was written, and after a fight between them, Dobson went to sleep but Manning wanted to convey his affection for his girlfriend before he retired.

Even When I’m Sleeping is a sweetly engaging love ballad, quite different from much of the group’s previous work, and for this reason was not initially regarded as a potential single release or even for inclusion on their debut album. It was not the first single lifted of Angel Blood, but it was the next, and it had an immediate impact.

Lyrically the song is about the essence of true love, how it brings you near though you are physically apart, bridges the gap between reality and fiction, replaces doubt and ignorance with belief and confidence in another person, “Don’t be confused by my apparent lack of ceremony/ My mind is clear/ I may be low or miles high off in the distance/ I want you near/ I love you, even when I’m sleeping/ When I close my eyes you’re everywhere.”

The record was produced by Justin Stanley at Megaphone Studios in Sydney, his credits include Beck, Prince, Leonard Cohen, Paul McCartney, Jet and Noiseworks, and here he brings a quiet authority and sparseness to the production, the song is stripped bare of artifice and glossy techniques. Abby Dobson delivers a bravura solo vocal performance of great sensitivity, drama and conviction, there are no backing singers.

Acoustic guitar, piano and drums provide a subtle yet insistent soundscape for Dobson’s keening vocals, it was deemed to be one of the best songs ever recorded in Australia as acknowledged by APRA who ranked it in the top 30 songs of the era 1926-2001, it charted #4 locally and was accredited as APRA’s Song of the Year in 1997. A cover version by John Farnham and a French version by Canadian singer Veronica Di Caire, confirmed the broad appeal of this tender love ballad.

The group disbanded in 2001, due to Abby Dobson’s ill health – rheumatoid arthritis and chronic fatigue syndrome – Abby released a solo album Rise Up in 2007 which failed to chart, she also unsuccessfully auditioned for Season 2 of The Voice Australia but returned to live performing in 2013 at the Byron Bay Bluesfest were the band were warmly received.