Geelong band Goanna started life as Ectoplasmic Manifestations, led by ex-folkie Shane Howard, they specialised in Bob Dylan covers performed at surf clubs and local dances along Victoria’s Great Ocean Road. Ultimately, they would hold the distinction of recording the first aboriginal land rights protest song in Australia, written by Shane Howard, whose concern about Aboriginal dispossession was sparked by a visit to Uluru, where he witnessed a corroboree and came to understand the strong spiritual connection between this sacred place and our indigenous people.

Didgeridoos, drums and then bass lead us into the opening verse and the rest of the band arrives with an aural wallop, the listener is now fully engaged, and the narrative is mesmerising, frontman Howard sings with a pronounced Australian accent, flat unvarnished vowels, at once laconic and then passionate, angry but never overwrought “They were standing on the shore one day/ Saw the white sails in the sun/ Wasn’t long before they felt the sting/ White man, white law ,white gun,/Don’t tell me that it’s justified, ‘cause somewhere, someone lied/ Yeah, well someone lied, someone lied, genocide!”

Bush animal sound effects, and rousing backing vocals from the group, are complemented by the musical attack of keyboardist Rose Bygrave, the guitar wizadry of Warwick Harwood, and the pounding rhythm support of bassist Peter “Brolga” Coughlan and drummer Robert Ross, all add to the theatre and drama of the song that leads us to the anthemic chorus “Standing on solid rock/Standing on sacred ground/Living on borrowed tiiiiime/And the way that change is comin down the line.”

Lifted from the Spirit of Place album it charted at #3 nationally, was on the charts for 26 weeks, the album hit #2 and charted for 43 weeks! Solid Rock eschewed the simple folksy protest ballad format for a hard-driving up tempo beat with insistent, riveting percussion, memorable guitar riffs, sound effects, and poignant, confronting lyrics, the song remains one of the most stinging and anguished indictments of the European invasion of Australia and the subsequent displacement of our First Nation inhabitants.

It also featured the didgeridoo for the first time on a commercial record, played by Billy Inda (No Fixed Address) and Bobby Djabanunga, and was also the first use of the word “genocide” in a song lyric to describe the impact of Australia’s white settlement on our indigenous people. Historian Manning Clark wrote the liner notes for the album and the video is a studio performance of the song by Goanna interspersed with images of animated Aboriginal rock paintings and Uluru – the “solid rock”.

Both Solid Rock and the Spirit of Place album were produced by the brilliant Australian singer/songwriter/guitarist/producer Trevor Lucas, a country boy from rural Victoria (Bungaree) who moved to the UK in the 1970’s, performed with the legendary Fairport Convention and was briefly married to Sandy Dennys, virtually unknown in Australia, he was held in high esteem in UK folk-rock circles.

Howard has maintained his rage and continues to campaign against racism and associated violence, substance abuse and the socio-economic chasm between black and white Australians. 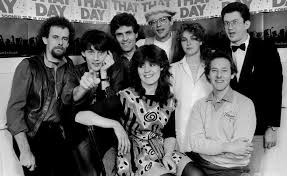