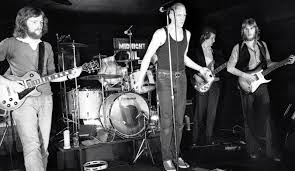 Midnight Oil emerged in the late 1970’s as band of purpose and integrity, prepared to take their songs into areas where few other artists were prepared to go. To the indigenous communities of Australia’s central and western deserts. To midtown, Manhattan for a guerrilla-style- protest -against the Exxon Oil company (below). To a heaving Ellis Park Stadium in Johannesburg, South Africa, in that country’s first post-apartheid, multi-racial concert, following the election of President Nelson Mandela. 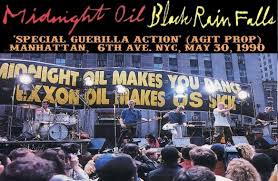 In purpose and integrity also lies resistance and refusal. A refusal to play/mime on Countdown, Australia’s long-running answer to England’s Top Of The Pops that was all but compulsory Sunday-night home viewing for over a decade from 1975-1987 in suburban lounge rooms. The many declined invitations to tour South Africa, for as long as Apartheid remained in place. 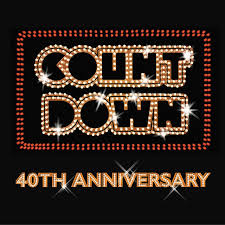 There was even a declined invitation to the Grammy awards in 1988, at the apex of Midnight Oil’s international success, so singer Peter Garrett could attend a protest at home against Bicentennial celebrations of the European invasion of Australia on 26 January 1788. Midnight Oil had their own priorities, their own agendas, and you either loved or loathed them, there was no middle ground. 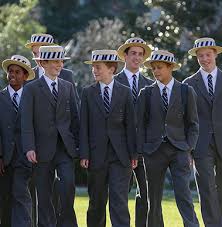 It would be Rob Hirst (below) (born 1955) and his Year 9 schoolmate Jim Moginie (born 1956) who would meet at Sydney’s Church of England Grammar School (also known as Shore, students pictured above) and become the creative core of Midnight Oil. Hirst was a fan of the Beatles, Stones, Doors, Bob Dylan, Creedence Clearwater Revival, the Who and he idolised their drummer Peter Moon.

Jim Moginie was an adopted child who sought solace and isolation in the music of the Beatles, respectively he and Hirst  would create the distinctive melodies and chords of Midnight Oil, and create a musical hybrid, that sounded like no one else. Jim Moginie became a multi-instrumentalist, proficient at guitar, keyboards, and a prolific songwriter. Rob Hirst was a celebrated and gifted drummer and creator of memorable melodies. They went to university, Jim completed a science degree and post-graduate studies in audio-engineering, there they met bass player Andrew Jones and the three-man Schwampy Moose was formed in 1971, a covers band who favoured Beatles and CCR songs that soon segued to become Sparta, who began to embrace the progressive rock of several British bands including Yes and King Crimson. 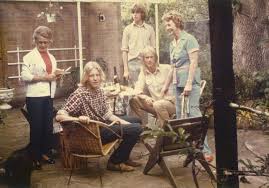 Peter Garrett was born in 1953 in Wahroonga, north-west of Sydney, into a Protestant working-class family, he was the eldest of three sons, whose father died whilst he was a teenager. In the picture above are Peter (seated centre), his brothers Andrew and Matthew and at far right his mother Betty, attending a family barbecue. Growing up Peter was a boy scout, he surfed, and attended as a boarder at Barker College (Hornsby) which he abhorred; his early musical influences were Split Enz, the Bee Gees, the Saints, Skyhooks and Muddy Waters. While enrolled in arts/law at the Australian National University, he joined the covers band Devil’s Breakfast (below), in November 1973, he answered an advertisement placed by Rob Hirst in the Sydney Morning Herald to audition for the position as lead singer with Sparta, who were about to change their name to Farm. 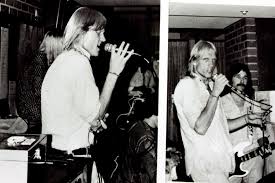 Garrett sang Jethro Tull’s Locomotive Breathing at the audition, Hirst and Moginie didn’t think that he had the best voice of those who had tried out for the job, but he did have a unique sound, a charismatic presence, and importantly his own public address system! Garrett would take another year to complete his law studies, and then join the band, in 1975. 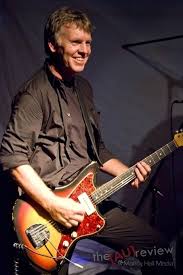 Martin Rotsey’s (above) family had emigrated to Australia when he was twelve, he also attended Sydney’s Church of England Grammar School where he played with garage band Gunja, and subsequently hooked up with Hirst and Moginie at university, where he was studying architecture. In 1975 Farm were playing professionally and effecting a glitter band’s look and sound, very prog – rock inspired and covering the songs of Yes and Focus as well as some Beatles and CCR. In 1976 they changed their name to Midnight Oil, inspired by the expression “burning the midnight oil” and the Jimi Hendrix song from 1967, Burning of the Midnight Lamp.

Garry Morris (far right in shot above) became their manager and by 1977 the band were Rob Hirst (drums), Jim Moginie (guitar), Martin Rotsey (guitar), Andrew Jones (bass) and Peter Garrett (vocals), and apart from replacing their bassist several times, they would maintain the same core of personnel over an amazing twenty years. The band and its management were united in not pandering to the dictates of Australia’s most influential live TV music program Countdown, and they never appeared. They debuted at French’s Wine Bar in Darlinghurst and were gigging around Sydney at the Royal Antler Hotel, the Bondi Lifesaver, and the Chatswood Charles Hotel, with a set list that included a mix of prog-rock covers and such original songs as Missy, Gettin’ Gone, Ensemble, Blue December, Drought, Nothing Lost, Nothing Gained, Powderworks, and Run By Night, several of which would appear on their early albums.

In 1978 Peter Garrett lost his mother in a horrific house fire at Lindfield, from which he narrowly escaped after trying to rescue her, and sustained burns to his body. Following his recovery the band continued to impress at live gigs with their raw energy and the visceral power of Garrett, so well described by the late Andrew McMillan at the time “… a politely reserved guy to chat with but onstage… his dark eyes recede from his bald skull like dark caves. Gouged holes. And the gleaming skull jerks, nestles into a twisted shoulder and he shudders like a psychotic killer on the loose. A haunted spectre of the rock ‘n’ roll vocalist, his singing ranges from thundering bass to whirling Split Enz wails.” Garrett would become one of the most outspoken and iconic singers of his generation, notable as much for his unique vocal style as his onstage rants which preceded most songs, and his movements which were also not standard pop star showmanship, he danced in a mesmerising, slightly robotic way, with riveting, rhythmic hand gestures – highly focused, exuberant, entranced, and slightly intimidating.

As the band progressed, the song writing powers of Hirst and Moginie in particular, would achieve a balance between melody and power chords which would allow Garrett to unleash his demons in between them. Complemented by the fine performance skills of all band members, they would become one of the most iconic live bands on the planet over the next decade, Sydney’s radio Double J adopted them before they had even released a record.