The Twilights were one of the most successful groups to emerge from the migrant community of Elizabeth in Adelaide, originally a three man a capella trio, left to right Clem “Paddy” McCartney, Mike Sykes and Glenn Shorrock, they were known as the Checkmates.

Their musical influences were the Beatles, the Who, The Move and the Small Faces and occasionally they performed with live instrumental backing at the Octagon Club in Elizabeth and in such Adelaide clubs as the Princeton, the Hi-Fi Club, the Oxford Club, and the Palais. One of these backing bands was the Hurricanes who ultimately merged with the trio to form the Twilights.

Laurie Pryor (drums) joined the band and with Shorrock/McCartney (vocals), Terry Britten (guitar), John Bywaters (bass) and Peter Brideoake (guitar), the classic and unchanging Twilights formation was now in place, unique for the time as they featured two lead singer in Shorrock and McCartney, in future years another Adelaide group, the Valentines would also emerge with two lead singers – Bon Scott and  Vince Lovegrove.

In 1965 the band relocated to the pop capital of Melbourne, moved into Lodge 52, Darling Street, South Yarra, and with their peerless covers of Beatles, Hollies, Who and Small Faces records, they dominated the disco scene at such venues as Pinnochio’s, Sebastians, Opus, Catcher, Biting Eye, Thumpin’ Tum and Bertie’s, Gary Spry became their manager and they were signed to EMI Records. The Twilights led the invasion of Adelaide bands into Melbourne at the time, and they were quickly followed by the Masters Apprentices, the Vibrants, Levi Smith’s Clefs and James Taylor Move.

Their first top 30 hit was Bad Boy, a cover of a minor US hit for New Orleans singer/pianist Larry Williams, recorded at Radio Recorders (LA) in 1958, he had previously scored with Bony Maronie (“57) and Short Fat Fannie (’57). Williams was among the early rhythm and blues artists to adapt his style to the new rock and roll     sound, and the song’s lyrics reflected a teenage sensibility, the bad boy in question causes trouble in the classroom, puts chewing gum in little girls’ hair, feeds the canary to the neighbour’s cat, and doesn’t want to go to school to learn to read and write. Musically it was conventional, energetic rock’n’roll, sounding more like a pop-oriented Little Richard. Williams mixed start-stop tempos with bluesey guitar riffs, exaggerated whoops, and spoken word comic commands, such as “Now junior behave yourself”, which the Twilights faithfully reproduced. Bad Boy had been recently covered by the Beatles, who omitted the tenor and baritone saxophones used by Williams, and opted for a more standard beat version of the song, which also influenced the Twilights           version, on which Terry Britten’s lead guitar was impressive. The Fab Four also covered another Larry Williams song, Dizzy Miss Lizzy., again with lead vocals by John Lennon, which appeared as a track on several Beatles albums at the time, the Twilights took Bad Boy to #22 nationally and followed up three months later with their first big hit, a cover of an early Motown song by the all-girl group known as the Velvelettes. 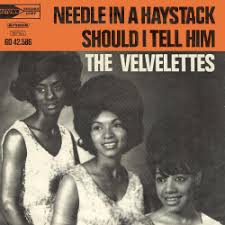 Cal, Bertha, Norma , Gil, and Millie were the talented Velvelettes, who came straight off the Motown production line, as part of the Berry Gordy Jnr. global assault on the charts, along with similar Motor City girl groups like the Supremes, the Vandellas, and the Marveletttes. Lead singer Cal Gill ( centre above) was an impressive front woman, soulful and bluesy, comparable to Martha Reeves and better than Diana Ross, but they were under-recorded and under-promoted by Gordy, who had his favorites at Hitsville USA, so they remained relatively obscure, and endured significant lineup changes, as the record cover above indicates, with the only original member there being Cal Gill. But they did leave us with the ebullient and plaintive Needle In a Haystack, which would be convincingly covered by the Twilights in 1966. The Twilights created their beat version of the song, complete with gospel-style call and response harmonizing, with the words and music of Motown songwriting royalty William Stevenson and Norman Whitfield, it charted #2 in September for the Twilights biggest hit.

They followed up in December ’66 with a cover of the R&B/soul singer Bill “Blues Boy” Johnson’s minor hit from 1965, You Got Soul, written by  Margaret “Cissy “ Nash, wife of singer Johnny Nash, the Twilights version introed with bass and handclaps and the impressive vocal harmonies of Glenn and Paddy, took the song to #24 nationally. 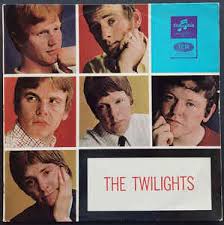 But the group were heading for London by the time the album was released in 1966, having just won the inaugural Hoadley’s Battle of the Sounds.