Scots immigrant George Redburn Young and Dutch immigrant Johannus Hendrikus Jacob van den Berg, better known as Harry Vanda, were a musical partnership of opposites, they arrived in Australia with their respective families in 1964 and at different times lived in deplorable conditions at the Villawood Migrant Hostel (Sydney). George was one of eight children in his family who came from Cranhill, an insalubrious working-class suburb of east Glasgow, the Youngs were a proud clan of dour, tight-lipped, often profane, combative Scots, whose sons would literally define popular music in this country for decades. Below – A glossy marketing image of the decrepit Nissan huts at the Villawood Migrant Hostel (Sydney). 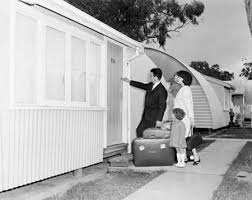 Harry Vanda was an only child from a relatively comfortable middle- class family in The Hague, he was a gifted guitar player who formed his own Shadows-style band The Starfighters as a teenager, and gradually taught himself English from the song lyrics he learnt. He was 187cm tall, blond, gregarious, good humored, trusting, and obsessive about making music. Below Easybeats circa 1966, L-R Stevie Wright, Harry Vanda, centre back Gordon Fleet, Dick Diamonde, George Young. 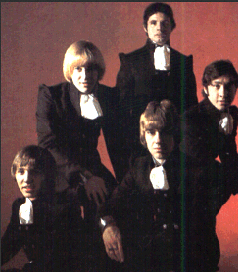 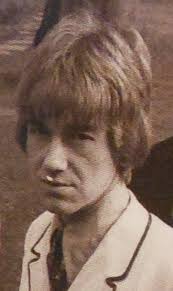 By 1969 the Easybeats were disbanding, they had failed to replicate the success of Friday On My Mind, Snowy Fleet had departed the group in 1967 and reunited with his wife Maureen and daughter Mandy in Perth (WA), where he briefly worked as a DJ and then moved onto a more permanent career in the building trade. His replacement drummer Tony Cahill was a competent player who shared a growing drug addiction with lead singer Stevie Wright, but after getting clean, Cahill joined another Aust. band, Python Lee Jackson, who would score a surprise UK top 5 hit in 1972 with In A Broken Dream.

Dick Diamond had married African-American singer/dancer, Charlene Collins in 1969 (above), but they would be divorced several years later. When Dick ultimately returned to Australia, he was suffering severe depression and withdrawing from extensive use of marijuana, he was taking some time to rid his body of THC, but after doing so, he found support back in the fold with the Jehovah’s Witness, his parents, and ultimately as an educator. Stevie Wright was living with his Australian girlfriend Gail Baxter in London and they would marry in the early 70’s after she became pregnant with their first child; he had secured a role in the Australian production of Jesus Christ Superstar, but his heroin addiction would become a lifelong struggle.

The contribution that Stevie Wright had made to Australian rock and pop cannot be under-estimated; with George Young he wrote five of the first six hit records for the Easybeats between 1965-66 when “Easyfever” was rampant- She’s So Fine, Women (Make You Feel All Right), Come and See Her, I’ll Make You Happy, Sorry, as well as Step Back for Johnny Young and Kompany – three #1 hits and three other top ten songs . He was only nineteen and he had already written six hit songs; his output was prodigious, he fronted the best band in the country and they were focused on international success, he would sing lead vocals on Friday On My Mind, the best Australian composition ever, as judged by APRA in 2001. When the Easybeats disbanded in 1969, Stevie was only 21, for a time he worked in a sheet metal factory, and later in the warehouse at Alberts Music, by 24 he was a heroin addict. Below- The Easybeats poised on the steps of their Qantas flight on July 10, 1966, that would take them to London to pursue fame and fortune. Harry is raising his little son’s teddy bear aloft as a signal that Johan was also on the flight, and going back to rejoin Harry’s family in the Netherlands, following the death of Pam Vanda only weeks before.

Harry Vanda’s first wife Pamela had tragically taken her own life in 1966 just before the band left for the UK, they had a young baby son Johan, who would be raised by his grandparents in the Netherlands. Harry would subsequently marry Australian girl Robyn Thomas in the early 70’s, and they would have two children. George had married Sandra Ramsay in 1969, and they would have one child, Yvette, better known as Evie, who would inspire the title of a famous Vanda/Young composition. Below – George and Sandra 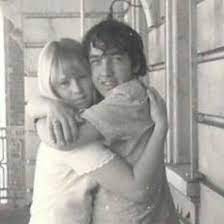 Their manager Mike Vaughan decamped to New York and surprised the group when he opened a bar on the lower east side, as all the band members were basically broke, and owed a considerable amount to Albert Productions, and would all soon be unemployed. Below Mike Vaughan.

By late 1969 Harry and George had moved into a flat above a Chinese laundry in Moscow Road, Holland Park (London), previously occupied by Crosby, Stills and Nash, which had a 2 -track recording system there, which George upgraded to a 4 -track studio. They could record demos at home, which Vanda and Young did for the next four years, between 1970-73, as songwriters-for-hire, as they gradually chipped away at the Easybeats accumulated debt, and supported their growing families. Their output was prodigious and included songs for such British wannabees as Tina Harvey, John Miles, Wheels, the Marcus Hook Roll Band, actor David Hemmings, and Eddie Avana/Paintbox/Tramp (all Vanda/Young pseudonyms).

They also sent songs back to Alberts in Sydney and several became solid local hits here – Falling in Love Again for Ted Mulry, Superman for Alison McCallum, and Can’t Wait For September for Erl Dalby and Pyramid.

Harry’s songwriting reflected his skills as a performer, he  was a gifted if somewhat under-rated guitar player, whose sounds were crisp, clean, and full of emotion –  the exotic Eastern-influenced interweaving guitar parts of Friday On My Mind, the anguish and despair of Evie, the pure violence of Black-Eyed Bruiser, the fun and exuberance of Good Times, the hypnotic, mesmerizing Europop of Love Is in the Air, and the quirky eccentric cadences of Down Among The Dead Men, he was a minimalist who played what was required and nothing more – elegant, soulful, simple, and sincere.

George young invented the distinctive rhythm guitar of Australian music, not only for his brothers who became AC/DC, but for every pub rock imitator who inhabited the beer barns of suburbia throughout the 70’s and 80’s. George’s rhythm guitar was not peripheral or an adjunct to their songs, it was front and center, the chugging engine room of their music, as their many songs amply demonstrated. 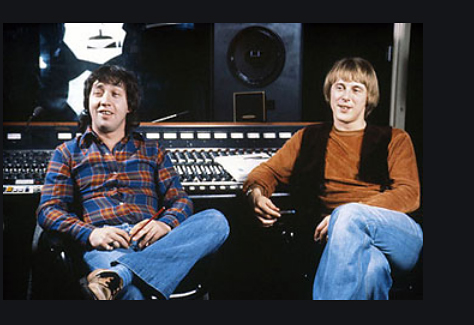 Their lyrics were intelligent, witty, cutting, and incisive; they invented genres, Flash and the Pan’s hypnotic rhythms, dominated by keyboards, and distorted spoken word rapping, actually preceded the invention of rap; the manic energy and drive of their  power pop, so evident in the exhilarating dynamics of early Easybeats hits  – Sorry, Wedding Ring, and I’ll Make You Happy, fueled the fire of “Easyfever”, and songs like Love Is In the Air, and Standing In The Rain, elegantly gathered momentum in sonic layers that built to a crescendo, and had your feet tapping before you even realized that you were fully engaged with the music.

Harry and George were the very essence of the Yin and Yang of the human dynamic, but they shared a strong work ethic, a burning desire to explore and invent musically, and they were fiercely loyal. George was astute, visionary, practical, highly creative, with a ready turn of phrase and under-rated singing voice, Harry made the songs work technically, he was a supportive, generous and creative partner-   a proud Scot and a dignified Dutchman – they had settled here, and would chart the history of Australian contemporary music, for several decades. Below – Ted Albert 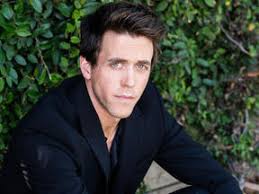 In 1973 Harry and George returned to Australia with a clutch of original songs and with the blessing of Ted Albert, took up residence on the fifth floor of Albert Productions at Boomerang House King Street (Syd), in front of their 16-track state -of-the-art mixing desk imported from England, it was known as Studio 139, and became a legendary location in the history of Australian popular music.

Harry and George would write/produce more hits for a more diverse roster of artists than anyone else in the history of Australian rock and pop – AC/DC, Stevie Wright, John Paul Young, the Marcus Hook Roll Band and Flash and the Pan (both Harry and George’s alter egos), William Shakespeare, Alison McCallum, the Angels, Rose Tattoo, Cheetah, Ted Mulry, Mark Williams, and others, as they moved on to reinvent themselves within the Australian music industry as the go-to songwriters/producers at Alberts Music for the next forty years. Below L-R Rose Tattoo, Cheetah, William Shakespeare. 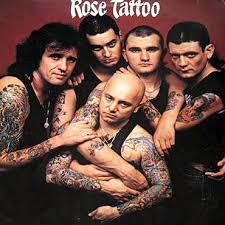 For trivia buffs George Young’s older brother Alex Young, was a member of the band Grapefruit formed by John Lennon in the 60’s, and Harry Vanda is a second cousin to Agnetha Faltskog of the Swedish supergroup ABBA. There are also those music mavens who maintain that it was Vanda and Young to whom Mark Knopfler was referring when he sang about Harry and George in the Dire Straits classic Sultans of Swing “You check out guitar George, he knows-all the chords/Mind, it’s strictly rhythm he doesn’t want to make it cry or sing… And Harry doesn’t mind, if he doesn’t, make the scene/He’s got a daytime job, he’s doing alright” Below- Easybeats reunion circa 1986. 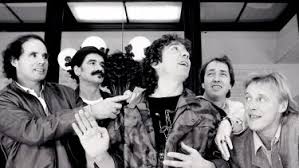 Vanda and Young were two of the original inductees into the ARIA Hall of fame in 1988 along with George’s younger brothers Angus and Malcolm as part of the global hard rock group AC/DC. On Oct 22, 2017 George Young passed away at the age of 70, three weeks later his younger brother Malcolm, AC/DC rhythm guitarist, would also die, at the age of 64. George’s Easybeats bandmate Stevie Wright had died in 2015 after a forty- year battle with addiction at the age of 68, and their great mentor and supporter Ted Albert, scion of the Alberts music family, had died prematurely in 1990, at just 53 years of age.

Over the coming weeks 4TR will profile the great hits of Vanda and Young, I hope you enjoy this retrospective, and remember your feedback and continued support are always appreciated.