Icehouse had started life as Flowers in Sydney in 1977, as a covers band who played the beer barn circuit along Sydney’s northern beaches during the punk era, adopting a style that reflected the influences of Roxy Music and David Bowie, and loosely described themselves as a glitter- punk band.

This was the era of New Romantic and New Wave music, but pub rock still ruled in Australia and Flowers walked the line between the two, signed to Regular Records their first hit song, Can’t Help Myself  in 1980 reflected the influences of such UK acts as Ultravox and Gary Numan, and it peaked at #10 nationally.They quickly followed up with the single We Can Get Together, the first time that Davies had composed for the guitar and not the keyboard, and it was also successful climbing to #16, as was Walls which peaked at #20 in 1981.

The band were now well-known for their synth-pop sound and obvious Bowie influences, they released their synthesiser-drenched debut album Icehouse in 1980, simultaneously changing their name to avoid confusion with a Scottish band also named Flowers, and taking  their debut album to #4 nationally. Signed to Chrysalis in early 1981 the band broke up that year, Iva Davies was a gifted but tyrannical front man, whose classical training as an oboist often meant that he demanded standards that rock musicians failed to meet, he would fine bandmates if they played wrong notes during performances. Following the demise of Flowers, Davies approached his next project as virtually a concept album for Icehouse, this would be his synth-pop masterpiece, the album would be Primitive Man, and the single pre -released from that album, would be Great Southern Land.

It would have been inspiring if this pop gem had been conceived by Iva Davies in the dream-like shadows of Australia’s greatest monolith, a shimmering sunset radiating from Uluru, conjuring a palette of bush colours, and a sense of interior alienation unique to this country. However the reality was vastly different, the songwriter had never been to Uluru, he was living in rented accommodation in the inner Sydney suburb of Lilydale, at 348 Catherine Street, surrounded by the insistent hum of passing traffic, and the drone of planes overhead following the flight path to Sydney’s international airport. Below – The house where Davies wrote Great Southern Land and many other songs, which he sold in 2013.

Despite the less than inspiring urban landscape in which Iva Davies found himself, he had created a home studio, complete with a new generation Sequential Circuits Prophet-5 polyphonic synthesiser, and a Fairlight Computer Music Instrument (CMI below) invented by two Sydneysiders, Ryrie and Vogel, and named after the Sydney suburb in which the two had invented it.

Armed with a Linn drum machine and the knowledge of a classically-trained musician, Davies was very much in solo mode, focused on capturing the radiating heat of Australia’s red heart, and evoking the indigenous spirit of Uluru, as a formidable anchor of our great land mass. 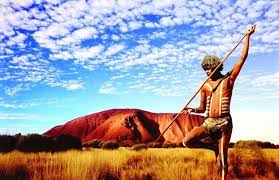 Davies has recalled flying out of Australia on his initial overseas tour and for the first time sensing the vastness of the country, so he chose to frame the song’s lyrics as a collection of fragments of phrases that would resonate with listeners – “Standing at the limit of an endless ocean/Stranded like a runaway lost at sea… hear the sound of strangers voices/ I see their hungry eyes… you walk alone like a primitive man/ and they make it work with sticks and stones.”

The blending of icy synths and Aboriginal clapsticks imparted a ghostly and spacious grandeur to the song, Davies brilliantly underscored our historical and mythical heritage here, the introductory section, before the sparse Linn Drum machine kicks in, is brooding and beguiling, and the slow merging of each instrument adds to the mystique and majesty of the musical ambience. Davies vocals were confident but subdued, very understated, he channeled Bryan Ferry in this way, a perfect interpretation given the epic nature of the lyrics and melody

Davies said that he was inspired to write a song that did not include the ocker clichés of Men at Work’s (above) Down Under, a recent huge international hit a year before. His record company were however particularly concerned to project an international image for Icehouse and did not want an Australian anthem as the lead single of the album, so Davies wrote Hey Little Girl to satisfy the insistent demands of Arista Records, and it did become their biggest hit.

But Great Southern Land has definitely become an anthem, not in a jingoistic way, but more about a vast country still coming to terms with its identity and its historical antecedents. It resonates with Australians in a way that inspires hope for the future in a country where the grandeur and sovereignty of the land itself evokes pride and wonder in equal measure. 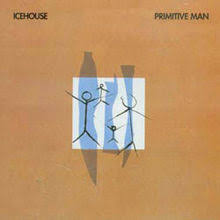 The original promo video was shot in a sandstone quarry at Wharoonga near Sydney in 1982, not in the red heart of Australia despite the apparent presence of native fauna, although a second version of the video was shot in 1989 for the movie Young Einstein, and was located at the more appropriate location of the Myall Lakes National Park, north of Newcastle (NSW), and this is the one featured here, Yahoo Serious was Australia’s answer to Forrest Gump.

Davies only re-assembled the Icehouse line-up when the album was completed, and they were to go on tour to promote it. Above L-R – Bob Kretschmer (guitar/vocals), Simon Lloyd (sax, trumpet, keys), Iva Davies (guitar/keyboards/vocals),  Paul Wheeler (drums ), Andy Qunta (keyboards/vocals), and Stephen Morgan (bass).

In 1983 the band was the support act on the David Bowie Serious Moonlight Tour, and also accompanied him as support on the European leg of that tour, Primitive Man charted at #5 nationally, and the album spawned a bona fide international hit with Hey Little Girl (#7) and Street Cafe (#57) in 1982-83. (Bowie and Davies above).

Surprisingly APRA did not include Great Southern Land as one of the best 30 songs of the modern era to 2001, but it was added to the National Film and Sound Archives “Sounds of Australian “ Registry, as a song that was “a culturally and aesthetically significant sound recording”, it is also the walk-out song for the Australian Cricket team, for all games played here in the Australian summer. When added to the NFS archives, Davies commented “I feel greatly honored, at the time I wrote Great Southern Land, I was attempting to capture within it something of the sense of place, and perhaps something of the soul of Australia. I had absolutely no idea at the time that people would react to it in the way that they did, and certainly not that they would still be reacting to it more than 30 years into the future. The song, and the way it has been received, still remains a mystery to me today, as it did then.”

Icehouse were inducted into the ARIA Hall of Fame in 2006 along with Midnight Oil, Divinyls, Rose Tattoo, Helen Reddy, Daddy Cool, and Lobby Lloyd.