Brisbane band Powderfinger had formed in 1989 as a trio of Ian Haug (guitar/vocals), Steven Bishop (drums) and John Collins (bass), Haug and Collins were students at Brisbane Grammar School and Bishop a student at neighbouring St. Joseph’s College Gordon Terrace. The trio gigged around Brisbane but were not full-time musos, they landed several appearances at the Orient Hotel which would become their local haunt over the years. Haug met Bernard Fanning at the University of Queensland and invited him to join the band as lead singer; Bishop was diagnosed with depression in 1991 and replaced by Jonathon Coghill on drums, lead guitar Darren Middleton was recruited from Sonic Tapestry, so that by 1991 the classic Powderfinger lineup which would release five studio albums in the next fifteen years, was complete. L-R below Darren Middleton, Jon Coghill, Ian Haug, Bernard Fanning, and John Collins

The band’s musical influences included local bands AC/DC, Lime Spiders, the Stems, the Sunnyboys as well as the Beatles, Rolling Stones, Led Zeppelin, the Doors, Steppenwolf, and Neil Young, from whom they had taken the title of one of his esoteric country rock classics for their band name.

The band rented practice space in the T C Beirne building in Fortitude Valley (above) along with many other local bands who were transforming the Brisbane scene from a covers-band wasteland to a merging of alternative and mainstream music that would flourish in the future as the compact disc market hit critical mass and original Australian music once again flourished. Other local bands to emerge from the melting pot of a nascent Brisbane market at the time were Toxic Garden Gnomes, Puzzlehouse, Screamfeeder, Custard, Brasilia and Pangaea, the latter two subsequently combined to become Regurgitator. 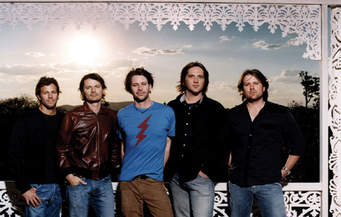 The Finger signed a five- album record deal with Polydor in 1993, company execs Tim Prescott and Paul Dickson who had discovered Men at Work when they were working together at Sony, believed that Powderfinger would be the new Midnight Oil – earnest, unique, talented and with a social conscience, they financed the recording of Parables for Wooden Ears, which would become the band’s first album.

Recorded at Metropolis Studios (Melb) with producer Tony Cohen (above), the band’s debut recording experience was problematic and ultimately flawed, the band had not embraced an identifiable, cohesive group sound, grunge was prominent and they would end up sounding like a poor imitation of Soundgarden. Cohen had worked successfully with Nick Cave who took little direction from producers in respect of his songs, but Powderfinger were relative neophytes in the matter of recording their material, they needed direction, Cohen’s hands-off approach and his general state of ill-health and frequent absences, did not create a positive, supportive or creative environment in the studio.

Cohen controlled the final mix of the album and ignored input from the band, released in June 1994 the album sank without a trace, Rolling Stone magazine described it as being in part “a certified jerk-off”, there wasn’t an obvious lead single, the album sold 3,000 copies and struggled to #58 nationally before vanishing 3 weeks later.

They picked up the pieces after the failure of their debut album and hit the road, becoming regulars on the Big Day Out circuit and playing support gigs for the Angels and US heavy metal band Pantera, they shared the bill with silverchair in Newcastle and quickly bonded with them, they would later undertake a national tour with the Newcastle trio.

Polydor were getting anxious about the band’s lack of radio-friendly material, they were introduced to a new producer in Tim Whitten and went into the Q Studios (formerly Rhinoceros) in Sydney to record the lead track on their second album, Double Allergic.

Pick You Up was to be the band’s breakthrough single, written by Bernard Fanning while he was sitting in the Lyneham Motor Inn in Canberra on tour, and missing his partner Phillippa Sison, who was also lonely and unhappy back in Brisbane. It was a song of support and empathy, the couple were a thousand kilometers apart, he started to strum his guitar and 30 minutes later the song had literally fallen out. Unlike many of their previous songs, the record was simple, uncluttered, a ballad of great gravitas that emotionally connected with fans, and now everyone knew that the Fingers weren’t just competent musicians, but that they could write their own songs too.

Producer Whitten proposed several changes to the song, to cut eight bars from the second verse and add an additional guitar line, it worked perfectly, and the band had their first top thirty hit single when the record peaked at #22 nationally in May 1966. The follow up single D.A.F. emerged from a circular riff that Darren Middleton had been experimenting with a for some time, the title was derived from the actual guitar chords in the song.

The intro features light clinking sounds which Middleton achieved by striking the guitar strings with the plectrum, while lyrically the song took aim at the general fascination with the X-Files and the popularity of that paranormal genre of such shows; it charted at #49, and the album hit #4 nationally for the band’s first top ten hit, and would go on to sell over 250,000 copies.

By the time the group went into the Sing Sing Studios in Melbourne in 1998 they had taken their second album Double Allergic to #4 nationally and were poised to record their first #1 hit, the adventurous and highly creative album Internationalist, which saw the band more clearly taking positions on political and social issues of the day.

Their producer was American Nick Didia (below) who had previous production credits with Bruce Springsteen, Rage Against the Machine, Neil Young, Pearl Jam, and Stone Temple Pilots.

The first single lifted off the album was The Day You Come, an esoteric mid-tempo piece with a slightly off-kilter rhythm, a lush chorus and Fanning revealed his falsetto for the first time. Lyrically the song was generally regarded as a protest by the band about the rise of right wing political influence in the country, particularly in their home state of Queensland, where Pauline Hanson’s far right One Nation Party had established an electoral base – “The people are frustrated…The system is collapsing/ Conscience is relapsing/ The damage has been done…Vision is rejected, the people’s choice is tested/ So ignorance has won.”

The song intros with a subtle staccato of guitar riffs, the tempo is restrained, Fanning’s counter-tenor vocals blend with John Collins bass line, backing vocals by the trio Tiddas enrich the mix and the The Day You Come emerged as the band’s most shimmering pop moment to that time.

It won the ARIA Award for Best Song of the Year in 1999, and APRA included it among the top thirty original Australian compositions for the period 1926- 2001.

The single charted #24 and the album Internationalist was #1 and occupied the charts for 86 weeks, the group’s next two albums would repeat this success.