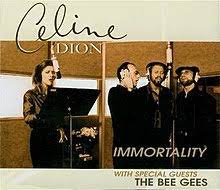 The Bee Gees had a long history of writing and recording hit songs for prominent female singers, Barry had recorded hits with Barbra Streisand, Samantha Sang, and Diana Ross, and others had benefitted from their pop song genius including Dionne Warwick, Yvonne Elliman, Terry De Sario and Dolly Parton (with Kenny Rogers), so a collaboration with one of the hottest female singers of the 1990’s, French-Canadian songstress Celine Dion, who charted with four US and Australian #1 hits in that decade, would be a match made in heaven. Dion had already successfully duetted with other singers in the past – Peabo Bryson (Beauty and the Beast ’92), Clive Griffen (When I Fall In Love ’93), R Kelly (I‘m Your Angel ’97), and would continue to do so in the future with Andrea Bocelli (The Prayer ’99), and others. 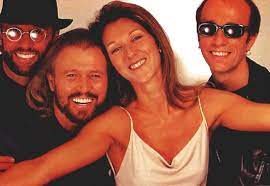 The vehicle for this occasion would be Immortality, written by the Bee Gees in 1996 for the Saturday Night Fever stage musical which opened in May 1998, and was originally demoed by Barry in 1996 in which Barry sang in falsetto to be in Dion’s vocal range. Celine recorded her version in 1997 to which the Bee Gees added backing vocals, and it was included on Dion’s Let’s Talk About Love album released in 1997, the Bee Gees included the song on Their Greatest Hits: The Record, released in 2001. 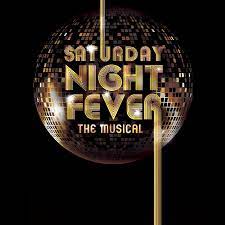 The joint performance of the song by Dion and the Bee Gees produced a memorable power ballad which blended the crystalline vocals of Dion with the pitch perfect harmonies and soothing falsetto of the brothers Gibb, critics generally praised the romanticism, flair, and charm of the song and it quickly became a hit throughout Europe, #5 in UK, and was a global million-seller.

Buoyed by the late- career success of the album Still Waters the brothers agreed to a one-off Las Vegas show at the MGM Grand Garden in November 1997, and it was here that the Bee Gees and Celine Dion delivered the definitive live version of Immortality, the resulting album was One Night Only, which predictably stormed the charts and was an international platinum-selling hit, #1 in the UK, USA and Australia and sold five million copies globally. The DVD of One Night Only was also a smash hit, and sold 1.7million copies making it one of the most successful DVDs at the time. 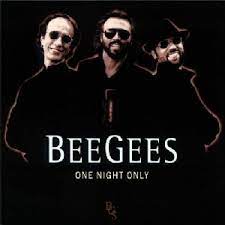 But personal crises in the lives of the younger Bee Gees continued to attract negative publicity, while Barry was happily married and he and his wife Lynda were raising their brood of five children in Miami, both Maurice and Robin had marital and substance abuse issues which impacted on their lives.  Below – Maurice and wife Yvonne, with children Adam and Samantha. 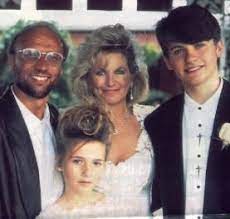 Maurice Gibb had been happily married to his second wife Yvonne Spencely since 1975, they had two children and although it was generally acknowledged that Maurice was a functioning alcoholic, several factors combined to transform him into a delusional, violent, dangerous drunk. The death of his younger brother Andy and the unimaginable wealth that he enjoyed following the hyper success of Saturday Night Fever, distorted his view of life, and he increased his drinking to numb the grief and confusion he was experiencing. On October 4th 1991, after a month-long binge on brandy, Maurice pulled a handgun on his family in their house in Miami, Yvonne and the children fled to Barry’s house nearby. Maurice checked himself into rehab the next day, he subsequently joined AA and seemed to have beaten the bottle. Later in life he became addicted to the sport of paintball, sponsoring his own team the Royal Rat Rangers and opening a store, Mo’s Paintball Shop, in North Miami Beach.  Australia fare welled the brothers at a massive live concert at Sydney’s Olympic Stadium at Homebush in March 1999, in front of 72,000 fans. Below Maurice third from the left back row with the Royal Rat Rangers. 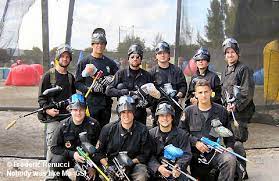